One of the most aggravating statements for a scientist to hear is that any scientific idea is “just a theory”, as if a theory is a random half-baked guess.  Of course, we jump to correct anyone who says this by describing how scientific theories are actually complex constructions with a lot of evidence behind them.  Ideally, we would address this issue head-on in all of our science classrooms so that everyone already knows this, but science classes rarely include “philosophy of science” activities.  Even if they do, they become mired in terminology that is poorly defined and that can’t be tested for student comprehension.  Can we do better?  I think there is a way, but it requires a new conversation about what science is and how it works.

First, though, we need to understand the problem we need to address.  Science is taught by specialists who are often far removed from their formative science education.  Many have forgotten when and how they acquired knowledge about the scientific endeavor (which is different from the knowledge generated by that endeavor), and may have even acquired it through their own personal curiosity and exploration rather than in a formal classroom setting.  As a result, philosophy of science and how the scientific process works are treated as presumed knowledge that surely students have previously picked up somewhere along the way as well.  Surely.  But this is often a faulty assumption.

As a result of this assumption, thousands of students pass through our science classrooms without learning how the scientific process actually works.  Instead, they walk away with the idea that science is a bunch of minutia to memorize or laboratory instructions to follow precisely.  Or worse, that any and all scientific knowledge is so tenuous that it is hanging on by a thread … that it is “just a theory”.  The outcome can be worse for students who become scientists.  They can maintain the idea that scientists have a “theory to prove” all the way into their formal careers, which can result in very public rebukes of these ideas for not being fully investigated or ignoring inconvenient observations.  This public perception of science as “just a bunch of theories” and scientists as people who are out to “prove a theory” arises from the way we teach science in our classrooms … as a collection of tenuous facts that can be overturned at any time by anyone.  Science, however, is not the work of extraordinary individuals overcoming intractable establishments to transform the world with a crazy idea.  Science is a relentless group process of moving from naïve ideas to sophisticated ones by definitively identifying what is definitely untrue.  This is a lot less glamorous than the popular idea of the scientific profession. 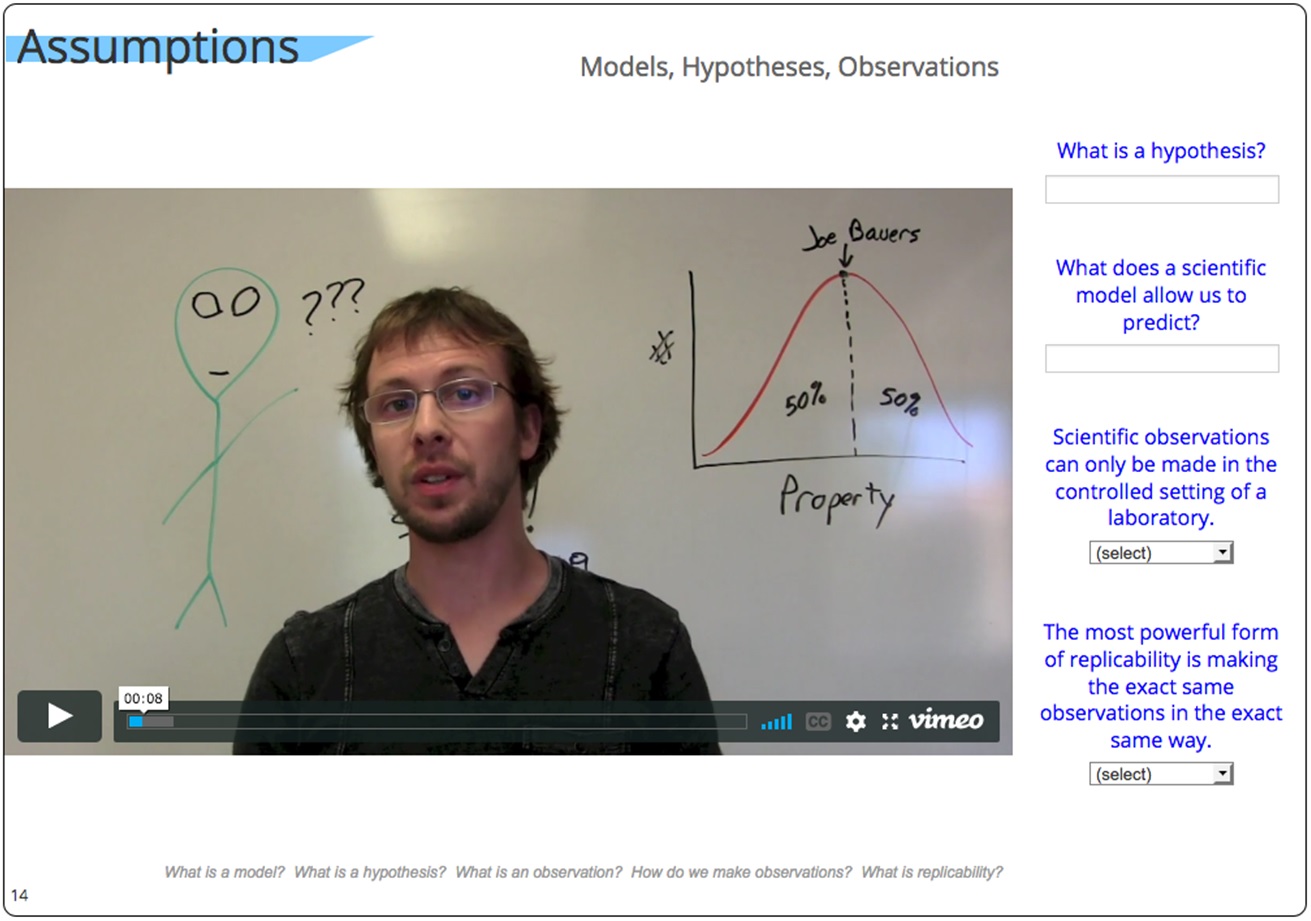 A first attempt at teaching the process of science in Habitable Worlds.  I explained science and then students repeated back what I had just said, as if that somehow demonstrated mastery of how science works.

To change this public narrative, we need to change the narrative of science we relay in the science classroom.  This can be difficult to do, especially if you’re a practicing scientist.  Scientists have spent so much time specializing in their respective fields that often they can only talk about the process through inaccessible jargon.  A number of years ago, I found myself contemplating this problem when teaching Habitable Worlds, an online-only astrobiology lab science course.  The lesson that was the hardest to write was the one on the scientific process itself.  The process of science was not only difficult to explain but, more importantly, difficult to test students for comprehension.  I began to realize that if I can’t explain the scientific process to others in a way they can understand, then I must not really understand it myself.  Of course, I know all the jargon and can conduct publishable research … but my inability to explain the endeavor to non-specialists was frustrating.  Without being able to explain how the scientific process works and engage students in the process, the whole rest of the class becomes just a fancy way of learning fun facts about the universe.

As I was contemplating this problem, I noticed that I had started to subtly change the language I was using throughout the course.  My students were math-averse, so many would seize up with fear when asked to collect data and analyze it.  To try to mitigate that fear, I slowly stopped using the word “data” and replaced it with “observation”.  Observations seem more innocuous than data and are better connected to everyday behavior.  We all observe the world on a regular basis.  If you asked someone taking in their surroundings what they are doing, they wouldn’t say “collecting data”.  They’d say “watching” or “listening” or some other word that means “observing”.  In essence, they are the same, but the language frames the activity more accessibly.

Additionally, early in the class we discuss the Fermi Paradox and the Drake Equation.  Both are approaches to answering the question “are we alone in the universe?”  But the answers they give depend on the assumptions you feed into either thought experiment.  In the Fermi Paradox, the assumptions are that life expands geometrically, that intelligent civilizations will want to colonize nearby stars, and that we are an average civilization so that others must be more advanced than us.  These assumptions lead to the predicted observation that we should have been colonized by aliens multiple times over.  Yet, our actual observations (no credible or confirmed observations of UFOs, abductions, ancient aliens, or reptiloid overseers) do not match our predicted observation derived from reasonable assumptions.  Clearly some of our assumptions are wrong.  But which ones?  The Drake Equation is a more refined form of the Fermi Paradox in that it teases apart the assumptions into more categories (stars, planets, Earth-like conditions, life, intelligence, civilizations, longevity of civilizations).  Some of these assumptions have been well-tested and replaced with observations (especially for stars and planets).  Others are active areas of questioning and refining (Earth-like conditions).  Others are still wide open (all the other terms).

Testing assumptions is really interesting for these thought experiments and they make for a fun class.  More importantly, though, testing assumptions is the essence of science.  You wouldn’t know this from any textbook, however.  Assumptions are treated as a dirty little secret that is hidden out of view, or ignored altogether.  Review any science textbook (and I have looked through many of them), and the only things that seem to matter in science are observations.  But observations are only half the story.

You cannot make every possible observation in order to construct a complete model.

So by necessity, you need to fill in the blanks.  With place-holder observations.  Assumptions.

This is where the true creativity of science lies.  Although acquiring observations may be standardized within a field, the assumptions with which we fill in the gaps are wholly dependent on our experiences, interests, culture, religion, and anything else in our world that shapes our thoughts and how we perceive this world.  The assumptions we make to explain observations we don’t understand are the heart of science.  If you listen to any scientific presentation, the speaker will focus on what has been observed.  But if you sit in a room of scientists discussing a proposal for something they want to study, the word “assume” gets thrown around ubiquitously, leading to excitement or vicious arguments over whether these assumptions are correct or reasonable.  Assumptions are the true heart of science and it’s time to highlight them in our classes.

Science, then, breaks down into observations, assumptions, and the models we build from both.  Each of these three aspects have skills associated with them.  Observation skills tend to be our lab and field skills.  Assumption skills tend to be our creativity and logical reasoning skills.  Model building skills include critical thinking as we consider the linkages between observations and assumptions.  When we think about scientific models as assemblages of observations and assumptions, we can articulate much clearer definitions of words that students currently conflate with mere guesses: 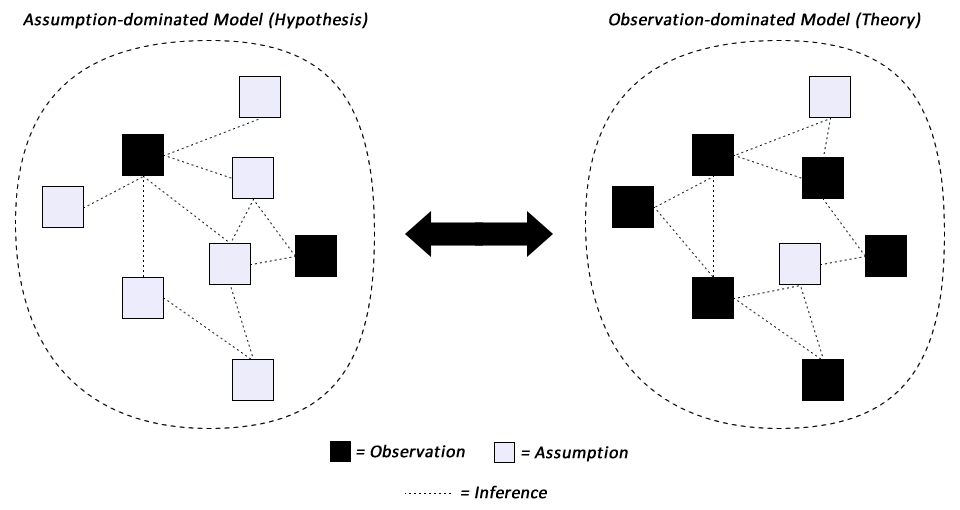 Any scientific idea can lie on the spectrum between hypothesis and theory and can shift back and forth depending on how many assumptions are in the model.  In general, hypotheses march towards the theory end of the spectrum as assumptions are tested, thrown out, improved, or replaced with actual observations.  But it is impossible to remove all assumptions from a model so even the best theory will have baked-in assumptions.  When those assumptions are challenged and eliminated, then things get interesting.  The connections we thought existed between observations may no longer hold.  And because we no longer know what those connections actually are, that gap becomes filled with a whole suite of new and exciting assumptions, sliding the theory back towards the hypothesis end of the spectrum.  In many ways, this approach more accurately describes what happens during a scientific revolution.  A theory isn’t thrown out.  It can’t be … it’s full of observations that are valid even if the connections between them no longer are.  It simply gets reorganized. 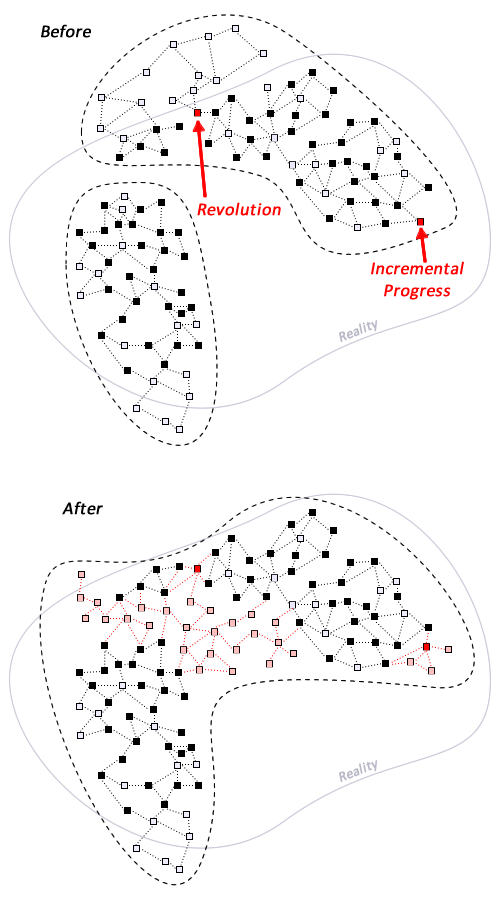 During a scientific revolution, models don’t get discarded, they get reorganized.  A model is part observation and observations don’t become invalid simply because their relationships to each other change.  A critical assumption may be disproven, forcing the collapse of a sequence of assumptions that had been built upon it (which is bad practice in general).  New assumptions can then be generated linking models that we didn’t realize were previously connected, bringing our models closer in line with reality.

I think there are many benefits to teaching science in this framework.  Observations and assumptions are easy-to-understand words that have everyday meanings that are accessible to all students.  It therefore becomes easier to link scientific behavior to “normal” behavior.  For example, if we’re stopped at a traffic light and the light turns green and the car in front of us doesn’t move, we don’t “collect data”, “hypothesize”, and “run an experiment”.  We make a reasonable assumption (the driver is texting) and respond accordingly (honk the horn), changing our behavior if we get an observation that is discordant with our assumption (the hazard lights come on).  Observe, assume, model, experiment, observe again, revise model.  All in a split second.  Science is just a highly formalized version of this basic everyday behavior.

This approach also creates an interesting framework for teaching any science class.  Scientists tend to be completists and so they want to tell students everything they need to know about everything before getting started on the new materials.  This results in an overwhelming amount of content that is difficult for students to organize and contextualize.  But if we reorganize around our personal observations and draw out student assumptions about these observations into the classroom for discussion, we can actively model the process of science as we move from the mental models students have already built to more sophisticated ones built through millennia of human observation and thought.

Teaching the Process of Science

Ditch the jargon.  Science is the process of moving from naïve ideas to sophisticated ones.  Everyone does this naturally and we don’t need to hide this process behind fancy words.

Use everyday terms to describe scientific behaviors.  Science doesn’t spring out of nothing.  We all engage in scientific behaviors, scientists have simply formalized them into a vocation.  Much like how you wouldn’t use complex cooking terminologies when first teaching someone to cook, treat your novice scientific thinkers the same way.