Scientists love their numbers.  Numbers and equations are an easy way of representing our understanding of the universe and extending it to places we can’t directly observe.  Scientists are so comfortable with mathematical language that it’s our default when explaining concepts to students.  To which our students usually reply, “I’m not a math person”.  And then we run into trouble.

I discovered this problem very early in the development of Habitable Worlds (starting in 2011), an online astrobiology course I developed at Arizona State University. When translating my activities from paper to an intelligent tutoring system (ITS), I started with a direct transcription. It’s an excellent place to start, even though it doesn’t take full advantage of an ITS. For example, in teaching the vastness of space, a typical lesson might focus pretty heavily on calculations, usually using speed and travel time to emphasize the shocking distance between celestial objects. In the first iteration of just such a lesson built in an ITS, I gave students a calculation grid … a list of objects down the side and a list of speeds across the top. Students were supposed to calculate how long it would take to get to LA, the Moon, Mars, Pluto, Alpha Centauri, the center of the Milky Way, and the Andromeda galaxy at driving speed (65 mph/105 kph), Voyager 1‘s speed (38,610 mph/62,140 kph), and the speed of light. That’s a page of 21 separate calculations, which is supposed to impress on students how incredibly vast space is. Upon deploying the lesson, this page quickly became a kill point that pushed marginal students out of the class. Without any sample calculations or strong guidance on how to figure out time when given the distance and the speed, a lot of students gave up. And those who didn’t got lost in a flurry of numbers and how precisely they should report them. At the end of the day, all the page had accomplished was to force students to execute a mundane algorithm multiple times and transcribe the results. There was no gain in appreciation for just how vast space actually is.

Slowly over time, I replaced this page with different activities. I broke the calculations out into separate pages so as not to overwhelm them with a calculation grid. First LA, then the Moon, then the other bodies. But after a certain point, the numbers become so big that they become meaningless. What exactly does driving for a trillion years mean?? We can’t even imagine driving for more than a few hours, much less a trillion years. At some point, the calculations become a purely intellectual exercise that give you numerical answers that don’t necessarily translate into a true understanding or appreciation for what those numbers represent.

My eventual solution was to replace most of the calculations with a guessing game. Rather than giving students a distance to Mars and a travel speed, I structured the problem differently. I had them complete the calculation for driving to LA from Phoenix (6 hours). This created a baseline of understanding, as this was a trip many of them had done before. I extended this calculation to a drive to the Moon to show them how quickly the reality the numbers represented became unimaginable (it’s 153 days at 65 mph/105 kph). Then, rather than doing any more calculations, I simply had them guess how long it would take to drive to Mars and would have the ITS tell them whether they needed to guess higher or lower. If they had properly calibrated themselves with the LA-Moon calculation sequence, then they would have guessed a number in the correct ballpark. Most students don’t and guess numbers that are way too low. On average, it takes students 3-4 guesses to get into the right ballpark (~60 years driving at 65 mph/105 kph). Then I have them do it again for Jupiter. At this point, students are properly calibrated, because the number of guesses drops to around 2-3 guesses (~640 years driving at 65 mph/105 kph). The approach seems to be working. However, most depictions of the solar system are distorted, making the outer solar system look more condensed than it actually is. The average number of guesses for a drive to Pluto (~5000 years at 65 mph/105 kph) jumps back up to 3-4 because students are underestimating as a result of the distorted imagery they’ve been seeing all their lives. By the end of the lesson, post-tests indicate that students have gained a correct conceptualization of the scales of space via this guessing game, which proved to be far more effective than my block of calculations ever was. 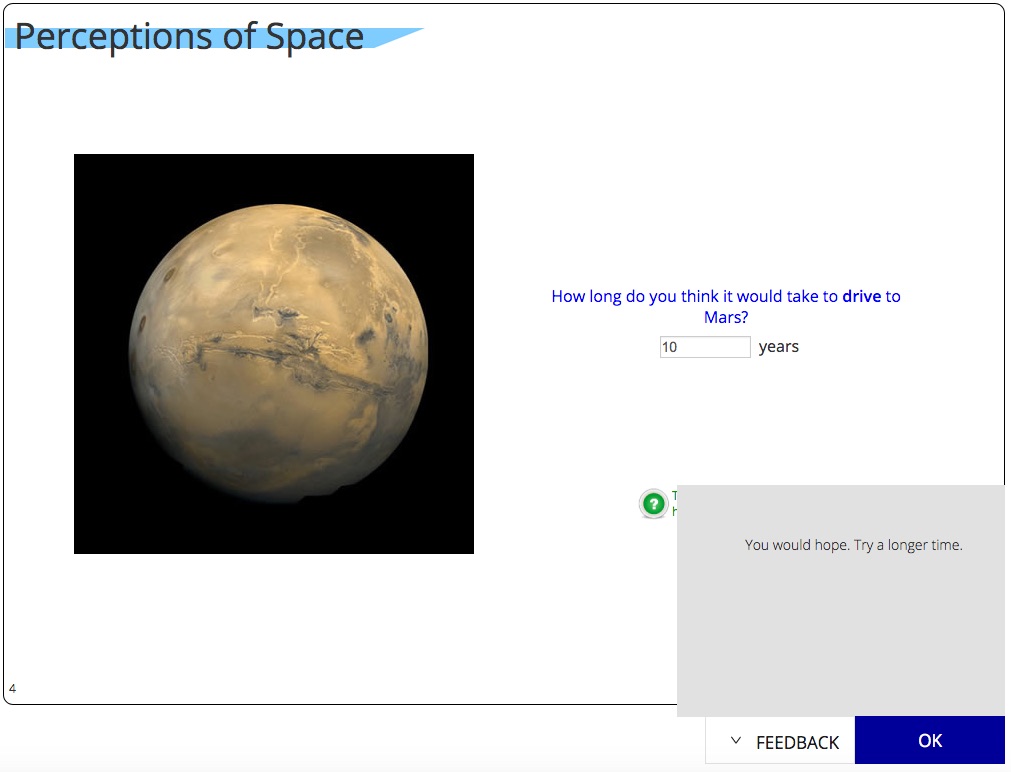 An interactive guessing game was far more effective in impressing on students the vastness of space than a block of calculations ever were.

This type of activity is something that can’t be done in traditional classroom settings. A guessing game like this can’t work with paper-pen because there is no feedback. It can’t even work vocally in a lecture hall because you are only interacting with one student and while you may change that student’s perspective by activating their feelings of surprise, observing students won’t share that experience, as they may have guessed different numbers but never got the feedback to their own personal guesses. This is where digital technologies can come into play. An ITS can allow the design of novel learning structures that can’t be done any other way, like a guessing game that leans into students thinking the universe is smaller than it actually is. This also allows us to start working around students’ general innumeracy. Innumeracy, then, becomes less of a shortcoming and more of an opportunity to try novel learning structures that don’t rely on explanation-by-equation.

When showing this activity structure at a teachers’ workshop in Ukraine last month, I received a lot of skepticism about this being an appropriate or professional way to teach science. This isn’t surprising because even as a student, I felt that “conceptual” science courses were dumbed-down versions of “real” science courses. But math isn’t science. It’s a tool of science. And there is benefit to learning concepts through tools other than math. Far too often when teaching at Chandler-Gilbert Community College this past fall, I found the math to be an active barrier to student learning. Many of my students couldn’t transcribe equations from paper into a calculator or Excel sheet (it’s not intuitive that you must use a “^” to create an exponent) and had difficulty with the logical structure of equations (order of operations). I spent most of my time during math-heavy labs correcting Excel equations and order-of-operation mistakes. In the worst cases, students were thrilled that the system finally accepted an answer and didn’t care what that answer was or meant … just that it was done. So what learning had been accomplished? I started to muse about just eliminating math all together in a future edition so that the students can more fully engage with the concepts and their logical connections to each other. Often I found it far more satisfying when I asked my students to strip away all the equations and calculations and simply focus on explaining to me what the numbers represented, rather than on how they were derived.

I suspect that a lot of science courses around the world fixate on mathematics (which is an important tool of science, but not the essence of science), and the idea that you can teach science at the introductory level without it will be surprising. I was amused that my Ukrainian teachers, upon finding no numbers for the distance to Mars in the guessing game activity, insisted on Googling the numbers so that they could do the calculations and get the right answer. Since this was a training session, I convinced them to just play around with the structure as it was in order to understand how it responded to their inputs. To my surprise, I saw the same type of behavior from the teachers that I see from my students. They discussed which guesses to try, made bets on who would get it first or who would be closest, and then expressed surprise as they had to keep pushing their numbers higher and higher (or lower and lower in some cases). And then, when doing it again for Jupiter, became competitive and attempted to get it in fewer guesses than before or their neighbors. Later on, upon returning to the argument that this isn’t the right way to teach science, I asked them where they had spent most of their time … on the calculation pages or the guessing game pages? They admitted that they spent more time on the guessing game because it was more interesting. And then the musings went in the right direction … “If this was interesting and effective for us, maybe these kinds of designs will also be interesting and effective for our students.” 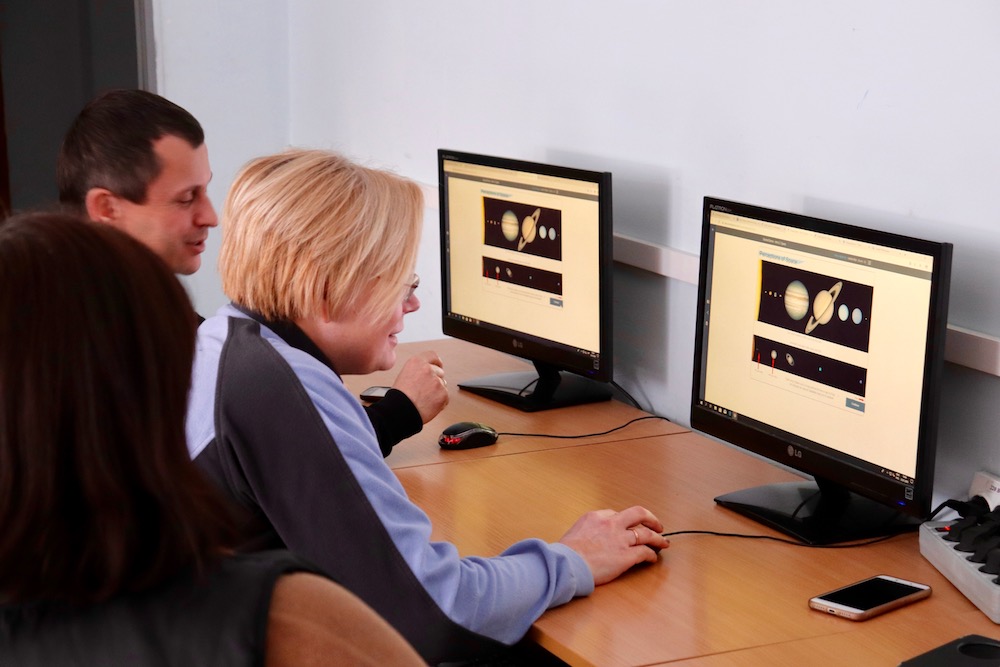 Serhii and Natalka compete to see who can guess the travel times correctly the fastest at the Teachers’ Workshop in Lviv, Ukraine, January 2020.

Numeracy is critically important to science. But it is not necessarily important for teaching science, at least not at the introductory level. Far too often, we use equations and numbers as crutches to explain difficult concepts. But equations are not explanations. They are descriptions of concepts and relationships. Through the clever use of even simple technology and game design, we can work around the innumeracy problem that plagues our students. Then, later on, after they at least appreciate the concepts and can work through their logical connections, we can build up their confidence in the mathematical language that can help them take those concepts beyond what we can immediately observe.

Trigger emotional reactions to content.  For trained scientists, numbers can inspire awe, but that is not the case for many students.  Surprising them through alternative structures, like guessing games or scaled interactions in time and space, can be more effective than showing a number.

Have students explain what the numbers mean.  Complete the calculation for students and give them the final result, asking them to draw a visual representation, explain what reality the number represents, or even simply evaluate it to determine whether it is a reasonable answer or not.

Convert to computer code.  It is not intuitive to students how to translate an equation with subscripts, superscripts, numerators, and denominators into a format that Excel or Google will recognize.  Pair each equation with its computer code equivalent.

Discourage calculator use and encourage Excel and Google usage.  Excel especially has the benefit of saving work, so once students set up their mathematical algorithm, they can use it more reliably than error-prone retyping into a calculator.

Avoiding math in a science class is not “dumbing it down”.  The most important task of a teacher is to convey an understanding of the material to students.  If abstract mathematical equations aren’t doing the job, then another method is required, especially logic puzzles that require critical thinking but not necessarily math.