My resolution passed.  That’s pretty much all I remember from my Model UN days.  That, and how nervous I was to get up in front of a crowd of other high school kids to propose a formal resolution to save the rain forests.  The internal stress of public speaking did not really match up to the anticlimax of a passed resolution that had no enforcement mechanism and felt like a hollow victory.  I dabbled a bit more in diplomacy role-playing over the years, but found more fulfillment in actually traveling overseas through summer and winter programs to participate in international learning, where I could meet local people and both see and hear about their lived experiences directly.  Those real international perspectives rarely ever crept into the role-playing games I participated in, where participants often pretended to be different but still unconsciously limited their options and behaviors to what they were familiar with from their own cultures.

As part of my Fulbright application to Indonesia, I proposed adapting a diplomacy role-playing course developed by my colleague, Dr. Tara Lennon, to where I was teaching in Indonesia so that both American and Indonesian students could have a true international experience right in the classroom.  I wanted to start addressing some of what I found lacking in my high school and college diplomacy role-playing experiences now that an international connection was cheaper and easier than ever.  Needless to say, the pandemic nixed those plans, but we continued developing the idea anyway, as the format was enticing … and fun.  That work eventually became the Greenworks program. 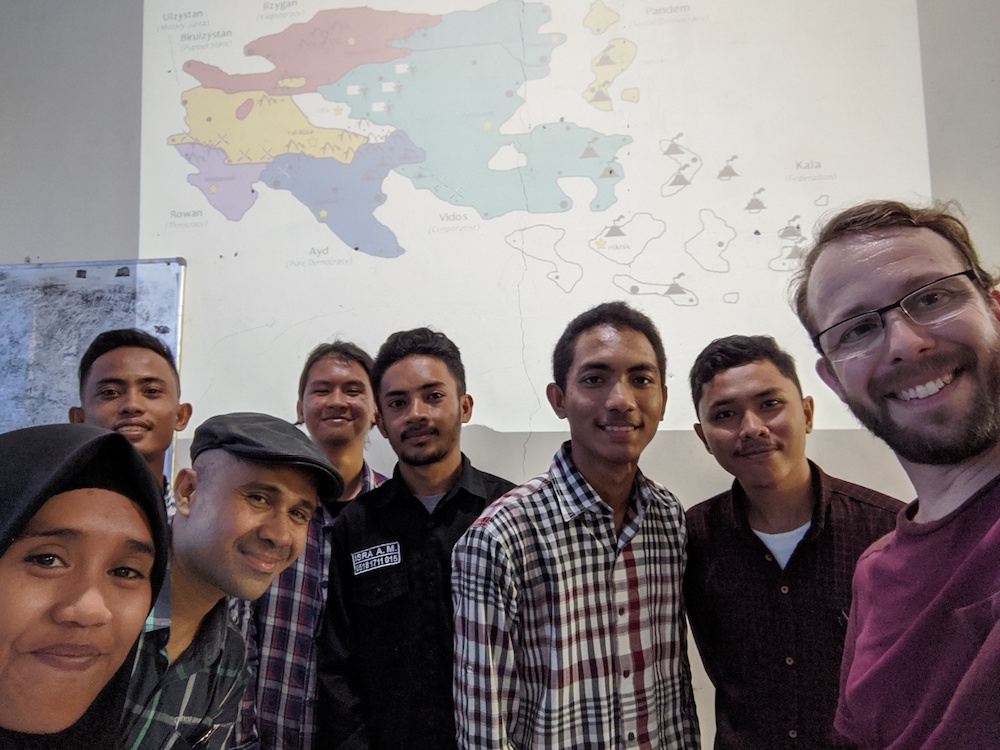 Orientation day for the spring 2020 attempt at Khairun University in Ternate, Indonesia.  Classes had shut down because of the pandemic the day before, before reopening for the day, then shutting down for good.  It was a confusing time.

In its current format, Greenworks is a Global North-South partnership program, where we’re aiming to bring Global North and South classrooms together to explore and address challenges in environmental stewardship and understand global perspectives on the topic.  The program consists of a role-playing game where students play as leaders of fictional nations navigating different environmental challenges while also dealing with the internal politics and governance structures that limit or enhance the kinds of decisions they can make.  When we have the money (and you can contribute to the Indonesian and Brazilian funds, if interested), we also provide the top-performing student groups with funding to implement an environmental stewardship project of their own design in their communities, to help them solidify lessons they’ve learned in the game by way of a real-life application.

As we’ve developed the program, there were many challenges we needed to negotiate in order to, well, get our students negotiating.  The late 2021 cohort was our first stand-alone experience with a full curriculum and independent lesson plans (previously, we piggy-backed on existing courses while working to integrate our international partners).  This cohort included students from Brazil, Ukraine, and the US (in a limited capacity) and gave us an opportunity to examine a variety of challenges in detail and observe how our solutions worked (or didn’t work) to address these challenges.  So, the highlights …

Game instructions were provided in three color-coded languages (English as the standard language, with Google Translate translations into Brazilian and Ukrainian and spot-checked to ensure faithfulness of translation, more or less).  Framing lectures prior to game events were given in English, with oral translation by local instructors for difficult concepts (particularly policy and governance topics).  Most students in both the Brazilian and Ukrainian classrooms could understand English well enough to understand the basics, although the language did prove to be an insurmountable barrier for some students who had little English experience and resulted in their disengagement. 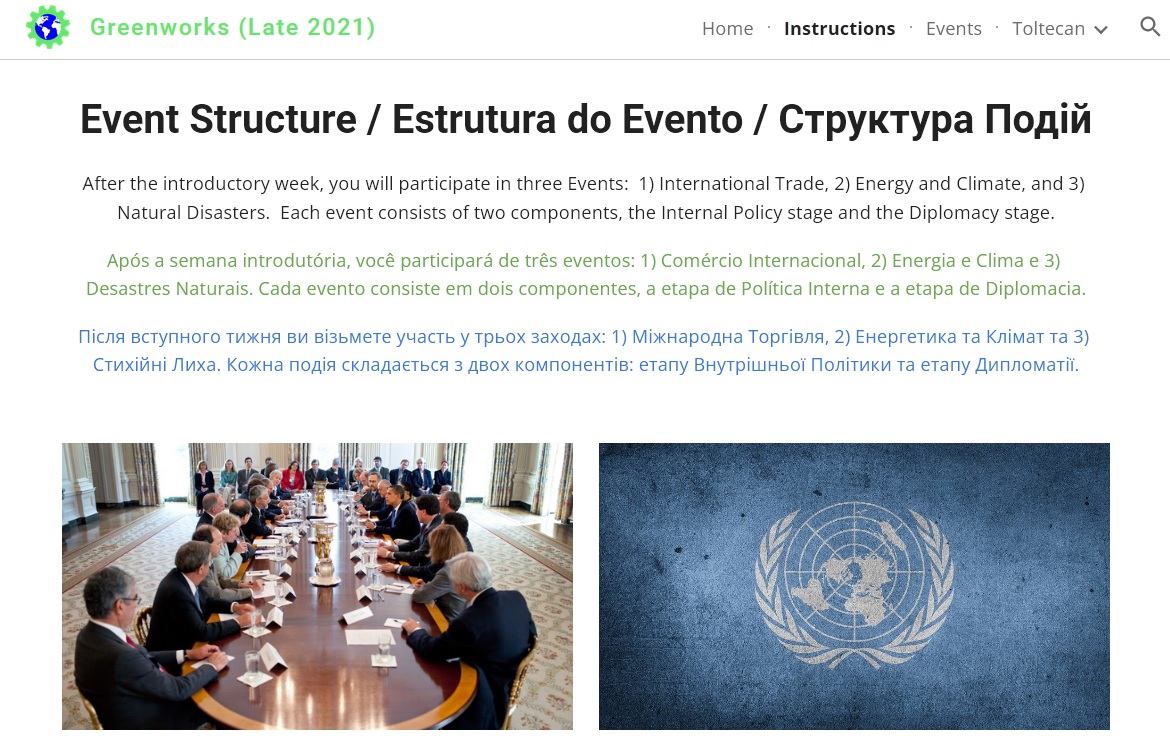 The time zones spanned from Eastern European (GMT+2) to Brasilia Standard Time (GMT-3) to Eastern US (GMT-5) to US Mountain Standard (GMT-7).  Additionally, daylight saving ended during the course, with not only the meetings desynchronizing, but desynchronizing in different weeks because not everyone ends daylight saving at the same time (and some locations choose, wisely, not to switch time zones for archaic reasons).  We ran two digital classrooms, one centered on the Brazilian students (Wednesday evenings EST) and one on the Ukrainian students (Thursday mornings EST), which allowed some students to cross over for diplomacy events without too much trouble.

The experience required Google Sites for students to post about their fictional countries, spreadsheets for exploring their countries’ resources, Slack for negotiations, Google Meet for lectures, and Google Docs for writing and posting diplomatic agreements.  Students additionally added WhatsApp, e-mail, and phone calls as channels for diplomatic negotiations amongst each other.  The huge novelty space created by so many technologies was a significant barrier to engagement, which we’re working on reducing for the next iteration with our own custom platform. 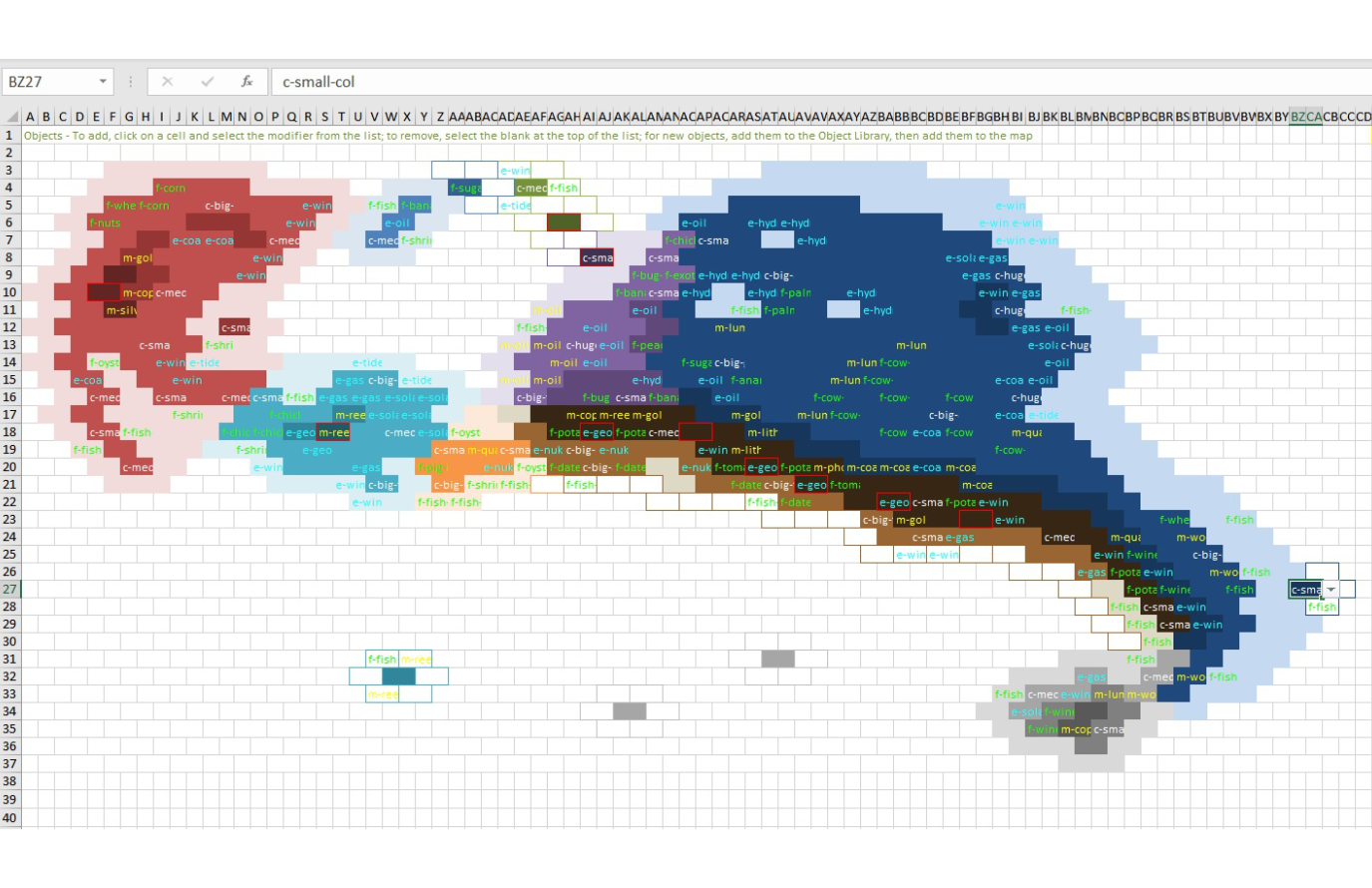 Gallery shows screenshots of the major tools used in the games.  1)  Google Sites homepage with introductions and instructions in three color-coded languages.  Each country had its own page, which students could customize.  2)  Excel spreadsheet of the Toltecan continent, showing geography, political boundaries, and location of cities, power plants, farms, and mines.  The spreadsheet calculates resource abundance/deficits for each country and has a rudimentary climate model that uses emissions from fossil fuel energy sources to calculate temperature, wind direction, and precipitation changes over the requested number of years.  Students only get the details of the country they lead.  Instructors modify the map based on what students do in order to guide scenario development.  3) Slack conversation between instructor and students discussing how to apply an embargo on an uncooperative country.  4)  Diplomatic agreement on energy cooperation between the countries of Segonia and Tabaria, written in Brazilian Portuguese (and English later on).

An important difference between US classrooms and others is face time.  US classrooms tend to meet much more often and for longer (3 hours per week spread across the entire week) than the overseas classrooms I’ve worked with (typically 2 hours once per week).  Additionally, the international classrooms usually have not previously been exposed to a dedicated active learning approach (where students are interacting with role-playing materials and each other instead of sitting and passively listening to the professor talk).  As a result, the format and amount of time it required to successfully execute was a bit of a surprise to most students.  This proved frustrating in the first few weeks when student activity was disappointingly minimal.  Engagement picked up once we dedicated some online class time to facilitate connections between student groups.  Also, the promise of a more global event with American students (only the climate change event was done with American students … our other two events, trade and natural disaster, were done between Brazilian and Ukrainian students only) encouraged more students to become engaged.  It also helped that a number of students were very much into role-playing and were able to serve as guides for other students as they became adjusted to the format.

Overall, the merged international classroom worked surprisingly well, despite the challenges.  One of the keys to success was to make the experience time-limited.  There were six weeks of role-playing, followed by an additional week breaking down the pedagogy and theory of the experience, since many of the Brazilian and Ukrainian students were also training to be future teachers.  The time-limited approach worked especially well because the October-November time-frame of the experience covered the overlap in semesters between different schools involved in the shared experience (the Brazilian spring semester ran from August-November, the Ukrainian fall semester ran from October-December, and the US fall semester ran from August-December).

Additionally, rather than being a stand-alone experience, the Greenworks curriculum and role-playing game was integrated into existing courses that students were already taking.  This required a careful balancing act to ensure that we hit the Greenworks learning objectives (science, policy, and soft skills) as well as the learning outcomes of the classes in which we were integrated, which varied depending on whether we were working with a geoscience or a political science class.  Co-development of learning outcomes and materials was critical to ensuring that we were covering topics that were important to all the instructors involved.

Overall, the first full stand-alone offering of Greenworks was tough.  One classroom can be challenging enough, but three in three different countries multiplies the difficulties tremendously.  There’s still quite a bit of work to do to streamline the model so that we can integrate classrooms and on-board their instructors more easily.  However, the proof-of-concept was deemed successful and intriguing by the students who participated, with an interest in trying again now that they’ve understood how it works.

Time-limit the joint experience.  Academic calendars are a mess not only between countries but also within the same country.  Keeping an inter-collegiate experience time-limited (4-6 weeks) makes it easier to find a time when multiple academic calendars overlap.

Link existing in-country classes.  Schools and universities may not be fans of students from outside the system benefiting from their instruction without paying tuition.  Linking together existing classes in each country and sharing part of the curriculum makes it easier to argue that the international experience is of mutual benefit.

Co-develop content.  Because multiple teachers are involved, it is important that the shared materials are co-developed to ensure that everyone is meeting the learning objectives they’ve identified for their own classes.  This is especially important when linking two very different classes (ie, geoscience and political science).

Translate all content into a local language.  English is a pretty good universal language for these experiences, but can be inequitable, especially for students from impoverished areas where secondary language instruction may not have been available.  Reduce the amount of content and ensure that there are excellent written and oral translations of all materials.

Use global technologies.  Various schools use various learning management systems that often make it impossible to integrate external participants.  Additionally, geoblocking and bandwidth limitations can make it impossible to access certain systems.  Find systems that are likely to work the same globally (like Google Sites and Docs, Discord, Slack, etc.) that can overcome these barriers.

Have patience.  An active learning experience will be new to both partner instructors and their students.  An instructor may need to participate in the experience as a junior partner the first time to observe and understand both how to structure the experience and how to support participating students.  Since the limited class time available is often used to introduce the material lecture-style, additional supervised class time may need to be scheduled to ensure that students have dedicated time to interact with each other.  This is especially important in distributed online classes.