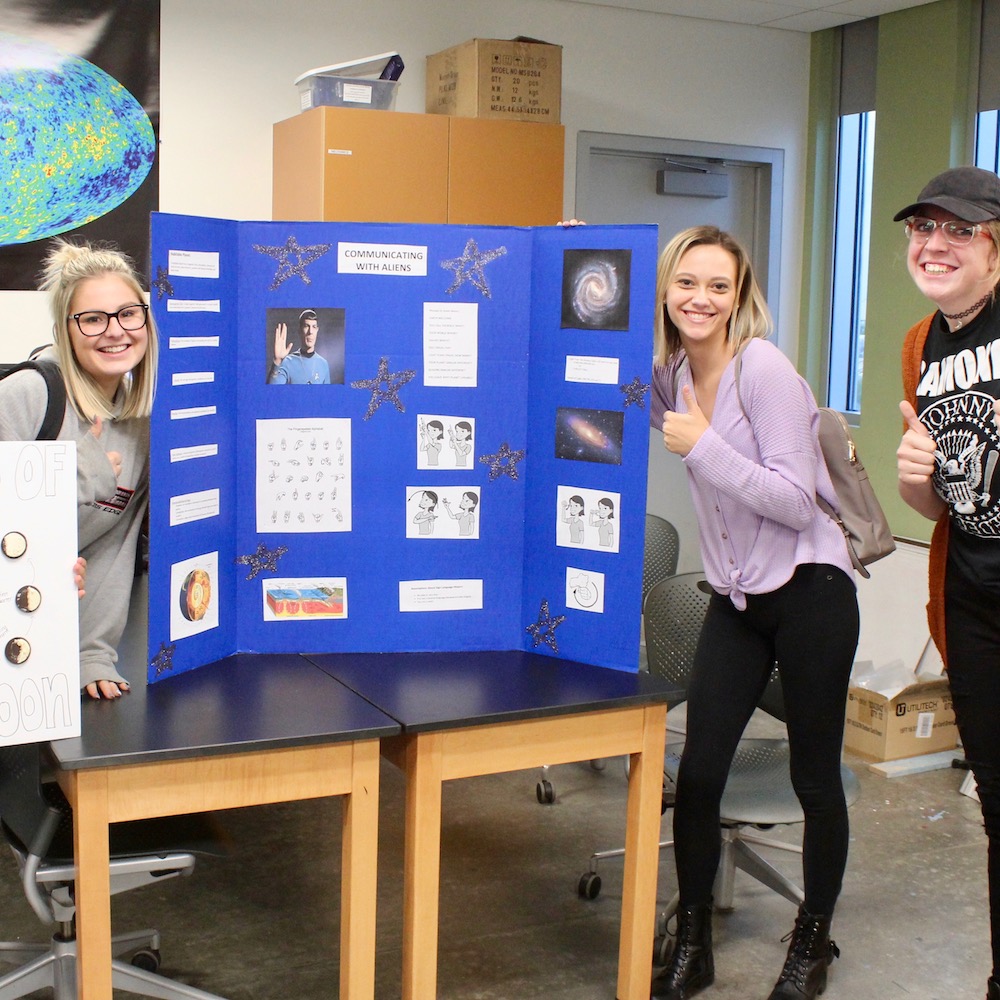 Victoria presents on sign language for aliens, with Taylor (left) and Lauren (right)

It is no secret that many students in general education science courses aren’t there because they want to be, or if they are, quickly lose interest when we hammer them with math and methodologies in lieu of easily memorizable factoids about the subject. Science departments, of course, want students taking some kind of introductory science course before graduating, with the idea that these courses will teach critical thinking and reasoning skills that are important for civil society. But do general education science courses actually accomplish these goals?

The answer to this question seems to be “not really”. There are many factors contributing to this problem. Often, science instructors were good students who naturally picked up the material, and so presume that everyone else learns just as easily (I certainly fell into that category early on). There is also an underlying assumption that science and its skills are self-evident and these skills will naturally diffuse into student minds with mere exposure to any kind of science. Essentially, there is a disconnect between the general student population (who tend to be shallow learners because most of their schooling has trained them to be so) and their science instructors (who tend to be deep learners because of a natural curiosity about the topics they study and teach). This is gap that needs to be actively bridged by instructors, as students cannot make these connections on their own.

I was curious how I could address this problem in my Introduction to Solar System Astronomy course at Chandler-Gilbert Community College, which was aimed primarily at non-majors.  The class topics focused on important concepts in astronomy and planetary geology, capped by a final integrating project.  Traditionally, my final projects tend to be complex puzzles, often mathematically focused.  But I couldn’t use my usual mathy project templates because I didn’t cover most of the topics that fed into those projects.  Instead, I decided to have my students construct their own projects.  The premise was for students to find some topic, concept, skill, or anything else that they learned about in the class and build connections to their actual interests and field of study.  I told them that I wanted them to find a way to make what we studied relevant to them.

Needless to say, many students were confused by this project. They genuinely had no idea where to start to build these connections, especially the students who were artists or history majors. To help students bridge this gap, I gave them pretty specific ideas for projects. For students who were studying business, for example, I suggested looking into asteroid mining, which they could link to meteorite chemistry and planetary object density topics that we had explored earlier in the course. For the artists, I pointed them to some of the awesome NASA travel posters, which used the chemistry of the objects to guide the color scheme. Once I made those initial connections for students, they were able to start exploring them in more depth on their own.

I planned to evaluate the projects on how good the science was, how well they connected the topics with their majors, peer evaluation and interaction, and presentation style. Unfortunately, with rare exceptions, the science content was lackluster. However, I was very impressed by the bridges they had built between the topics we studied and their majors. I was even more impressed by how well they communicated amongst each other about these connections. Even the shyest students became animated when they discussed their interests and how they saw astronomy intersecting with them, easily answering questions from other students and engaging in lively conversation. By the end of the project presentations, instead of lamenting that my students had picked up less science than I had hoped, I was lamenting a lost opportunity to build a community that could have explored more deeply those astronomy topics that had sparked everyone’s interest.

The student projects were illuminating for me as an instructor as well. I had tried to get to know my students early on by having them introduce themselves and tell me their majors. But like in any other meet-and-greet, the information was lost within seconds and my students mostly remained blank slates to me, aside from a few personalities that stood out immediately. After the projects were complete, my view of my students was completely changed. I was able to see what motivated and excited each one of them, instead of just the few who were active participants in my class. I also began to understand the structural differences I had observed between my two classes (the silent and disengaged one was full of artists, while the lively and engaged one was full of business and criminal justice majors). When the projects were finished, I wished that I had done them in week 3 rather than week 15. An earlier project deadline would have helped me understand my students earlier, including their interests, strengths, and weaknesses. It would have made it easier to craft our study topics into a format that would have connected with them better, and an earlier project would have opened up opportunities to iterate on those initial designs over the semester to improve depth of knowledge, presentation skills, and community building, most of which were lacking and were too late to fix by the end of the course. 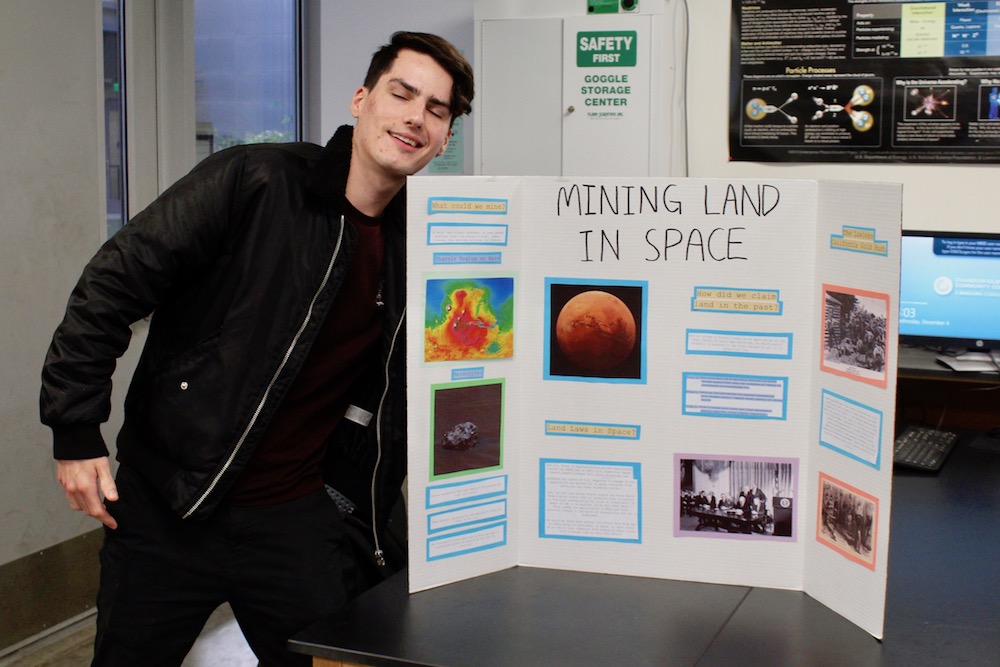 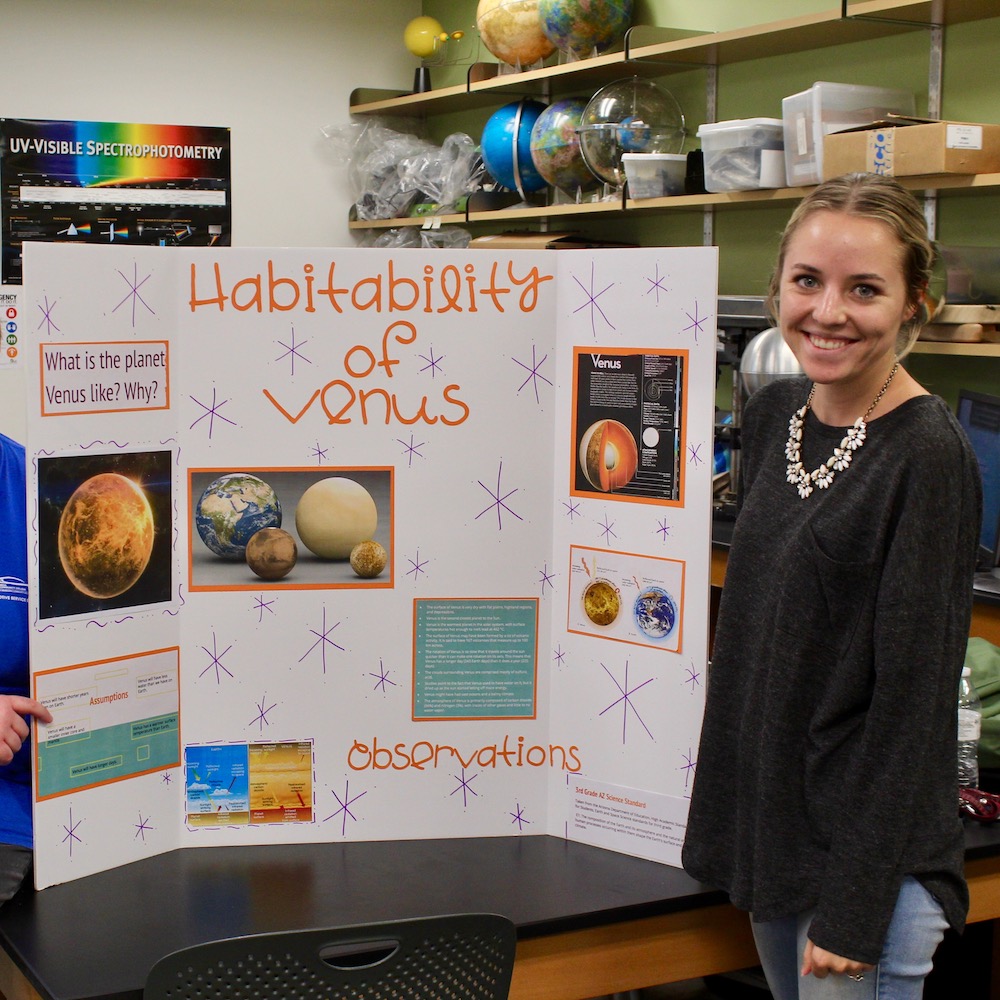 Run an iteration early in the semester and build on it over the semester.  It will help you get to know your students better, provides a foundation upon which you can explore topics of general interest and relevance to students, and builds community that you can utilize later to build interdisciplinary team projects.

Tell students exactly what class topics they can connect with their major and how they can connect them.  They do not know enough about the topics you are teaching to be able to identify which ones will be relevant to their own majors and how to make those connections.