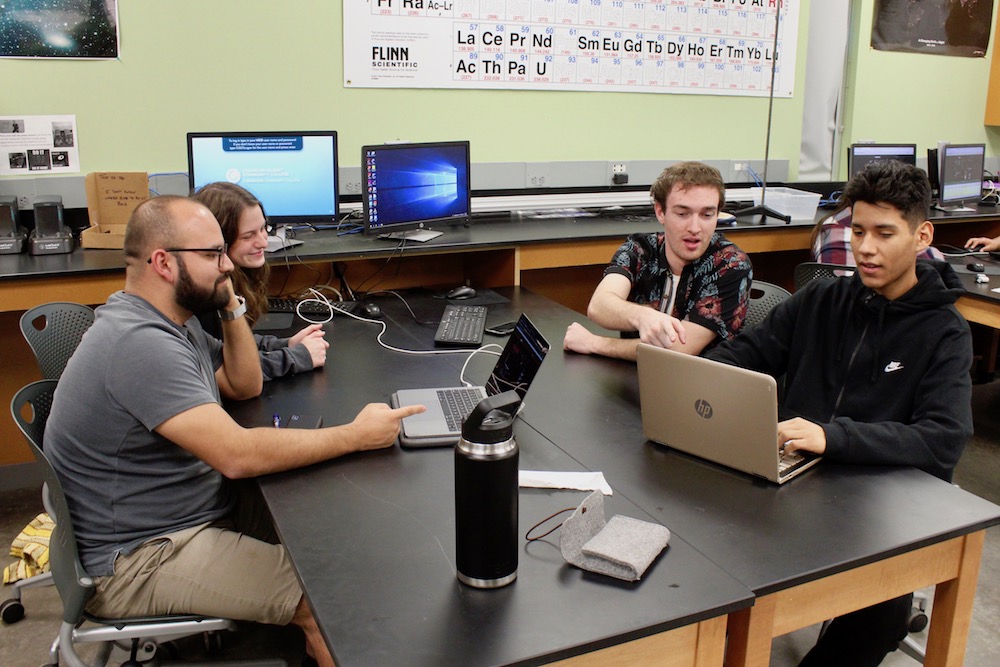 Successfully engaged students who definitely are not faking their enthusiasm.

My favorite course that I have ever taught was the lab component of the Introduction to Cosmology course at Chandler-Gilbert Community College last semester.  This course was a disaster mostly because I was so overloaded with my Introduction to Solar System Astronomy courses and their labs that this lab was an afterthought.  I had been told that the labs were pretty much the same between all the courses, but they really weren’t and between trying several new approaches with my main courses and running an additional lab for another instructor, that didn’t leave me much prep time for this lab.  So I started with pre-prepared paper labs and just handed those out every week.  The students weren’t engaged and when I eventually sat down to grade the labs, I realized that their answers were pretty bad.  It wasn’t just because the students weren’t doing a good job.  Many of the questions were poorly or ambiguously worded, resulting in answers that were pretty poor as well.

But for some reason, I had clicked with this class. Maybe it was a joke I had cracked about them slashing one of my tires when said tire blew out on the highway the day before. Or maybe it was because they brought me free food. Or maybe it was the conversation I had with one of my students who asked about a conference I was attending and what I was presenting on. I said that it was about best practices for teaching science and lab courses, especially results stemming from my work in digital science education. She asked if I was using those best practices with this class. I said that I wasn’t because I didn’t have time to do the prep. She pointed out that that wasn’t really fair to the class and the students who were paying my salary. I realized she was right, especially after reviewing the results of the paper labs and seeing how unsatisfying they were. I owed this class more.

For my Habitable Worlds class at Arizona State University, I developed a final project that consists of a sky of 500 randomized (fake) stars that students need to analyze to discover habitable worlds (of which there were only 10). Each star requires about 30 calculations and analyses to complete. However, analyses can be streamlined with funding. A student can pay to evaluate their analyses and if they demonstrate that they have mastered the analysis (by doing it correctly a set number of times), the analysis is automated for them and they can focus on higher-level analyses and strategies. In the second half of the semester for the Cosmology lab, I decided to throw this project at my complaining students and see what would happen. They, of course, immediately regretted their complaints of me not doing my best work (yet somehow still nominated me for a teaching award with the ringing endorsement of “He tried”).

The initial reaction was shock and confusion. They had done enough on their paper labs in the first half of the semester to complete some of the analyses, but I quickly realized that I would need to supplement with additional labs and activities so that they could do the rest of the analyses. Even though I had suddenly thrown a mountain of challenging work at them, I noticed an immediate change in the class. Engagement shot through the roof. Students who had been disengaged with the paper labs were working on the puzzle-based project on their own time and became impatient for me to release additional content. Discussions in the class increased, as did student leadership as those who figured out tricky concepts taught them to students who were struggling with those same concepts. We went from ending classes forty or fifty minutes early because we ran out of material to students showing up early and working through their breaks to complete the project, or staying long after class was over because they felt compelled to solve it. It was an extraordinary change and although most students couldn’t quite complete the full assignment, all agreed that they learned more in the month of struggle with this puzzle project than the cookbook recipe labs we had been doing up until that point. 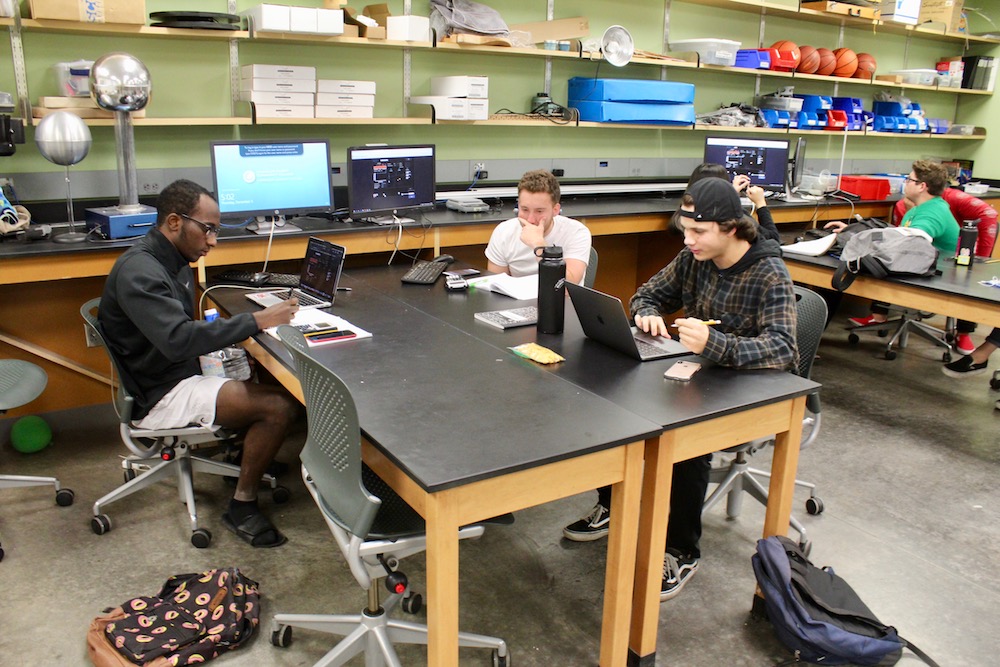 Students puzzling through a complex project over multiple weeks, working with students they didn’t typically work with

Have a focused question or task.  For the Habitable Worlds project, it was “find the habitable worlds in this field of stars”, but you can imagine other challenges, such as “find the pollution source,” “solve this medical mystery,” or “select and site a new power plant.”

Have broad metrics for success.  For example, rather than “find whether there is a habitable world around this star” use a task like “find a habitable world in this area.”  This gives students more agency and increases engagement because their choices in how to approach the investigation actually matter.

Use randomization to create the illusion of infinity.  Each student gets the same 500 stars in the Habitable Worlds project, but they don’t know it because the positions and names of the stars are randomized. The illusion that they are each dealing with a unique dataset pushes them away from waiting for one person to find the answer for copying and towards collaborative work that improves overall understanding.

Incorporate game mechanics.  Your puzzle project doesn’t need to be (and shouldn’t be) a game. But you can use game mechanics to engage students. For example, rewards for performance are an easy mechanic to incorporate (in the Habitable Worlds project, it was automated calculations for mastered equations).  Risk is also a good mechanic to use (in the Habitable Worlds project, it was limited funding, but you can easily imagine using limited samples and destructive vs. non-destructive analyses).