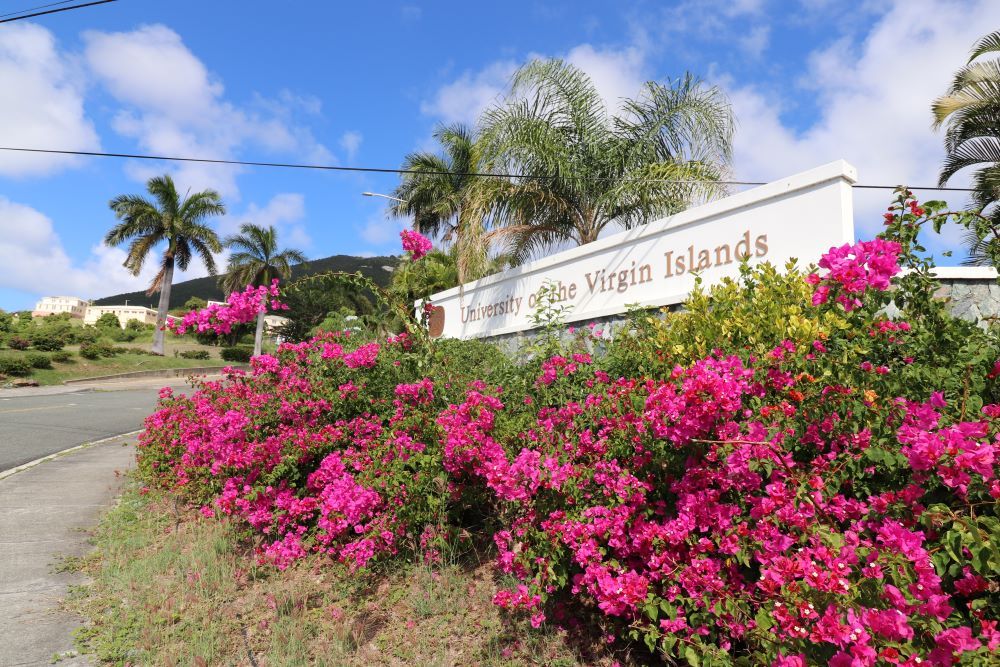 Quality online science teaching has always been difficult, even more so during a global health emergency.  What can make it even tougher is moving to a new location and starting at a new university where you can’t meet any of your students or fellow faculty in person, nor really move around the location due to lockdowns.  This can create a very disorienting experience where you both are and are not present in a new location.  But I guess that’s appropriate for my shift to teaching physics at the University of the Virgin Islands this past semester.

The University of the Virgin Islands is located on St. Thomas, one of the three major islands of the US Virgin Islands (the others being St. Croix and St. John).  The US Virgin Islands, about 100 miles (160 km) east of Puerto Rico, have a rich history in plantations, piracy, and slave rebellions.  They were a Danish territory until bought by the US in 1917 to keep the territory out of the hands of the Germans during World War I.  Thus to this day, they are the only place in the United States where you drive on the left (as opposed to the right).  The University of the Virgin Islands is a historically black college or university (HBCU), founded in 1962 to serve the local population, who are 76% Black or Afro-Caribbean, 16% White, and 8% Asian, mixed, and other.  Both the island and UVI were devastated in 2017 by Hurricanes Irma and Maria, resulting in catastrophic damage that the community is still very much recovering from.

Getting a feeling for the local flavors, customs, and idiosyncrasies, which I relish upon arriving in a new location, was especially difficult since shortly after I arrived, the island locked down due to a spike in COVID-19 cases.  Instruction was online via Zoom from where I was living, and although my view during class was spectacular, it created a disconnect with my students, who mostly manifested as screen names and still images on my screen.  Add to that a topic that can be very abstract (physics) and there was the potential for a very unsatisfying experience for both students and teacher. 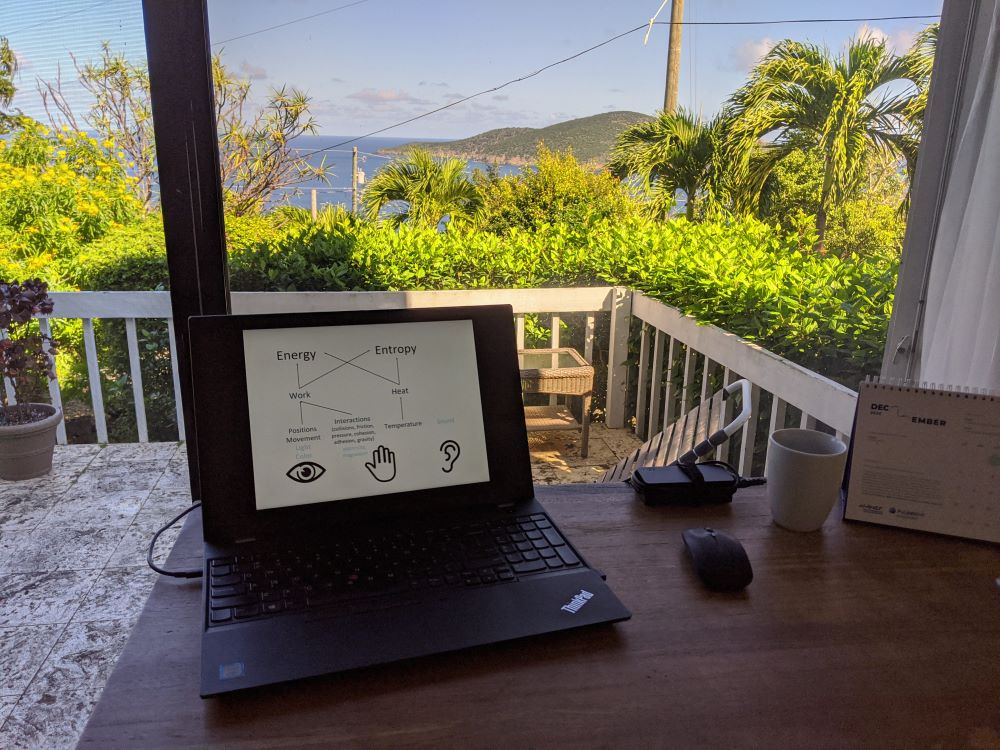 Definitely a better view for lectures and labs than a classroom.

In my previous experiences with physics in both high school and college, I found the topic to be one of the least compelling sciences, as its teaching has been reduced to equations, diagrams, graphs, and all manner of abstractions that didn’t feel as real or interesting as, say, looking at fossils.  I didn’t want to replicate that experience for my students because, after all, physics is the study of the underlying nature of reality which should be far more fascinating than it is often presented in its initial introduction to students.

One of the approaches I have been exploring the past few years for science teaching has been to ground it in personal observations and to build up an understanding from personal experiences, rather than through immediate abstractions like atoms.  This is easier said than done, as most students (or people for that matter) are not very good at observing.  I demonstrate this to my students at the beginning of each course I teach by tricking them on the first day of class to fall into cognitive traps, such as the inattentional bias, optical illusions, and confirmation bias.  With this kind of introduction, science becomes something more than a list of facts and equations that other people have discovered.  It becomes a way of making better observations, better assumptions, and building better models from both so that we can make better decisions.

But it’s not enough to just tell this to students on the first day of class.  Scientific observation and reasoning are skills that need to be developed all semester long, which is what I was working on this semester.  We would like to think that observation skills are fairly straightforward, but it turns out that they are not and are a skillset that needs to be explicitly trained.  For example, take a look at this picture.  Using one word, what would you use to describe what you see here? 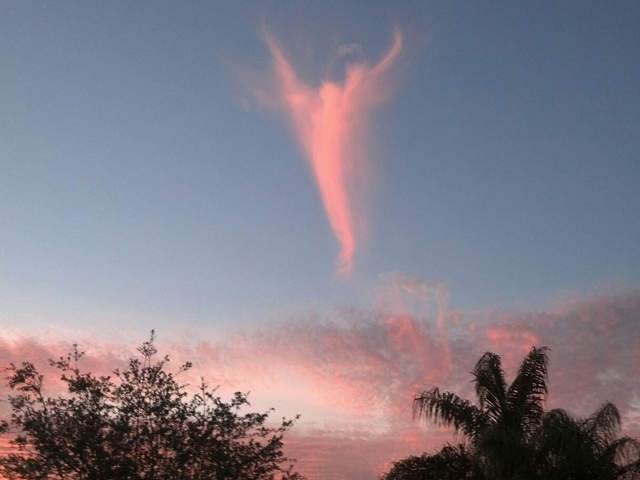 Using one word, describe what you see here

The answers, at least in an American setting*, fall into two categories:  “cloud” and “angel”.  One is a bland object tag (cloud) while the other is an interpretation of its shape (angel).  In digging through the data from an activity that used this question in my other digital classrooms, I had previously found an interesting correlation.  Students who answered “angel” for this question seemed to have a more difficult time distinguishing observations from interpretations later in the activity.  How robust this connection is I didn’t end up exploring any further, but it stuck with me when I was thinking about how to better teach observation skills.

The solution I developed this semester was the “observation journal”.  I really wanted students to focus on the world around them and document what they experienced so that we could pull those experiences into the physics we were learning.  Additionally, it gave me a better taste for life on the island, which from isolation I couldn’t exactly experience.  The first journal in this sequence came with as few directions as possible.  This was deliberate because I didn’t want to prejudice students into only documenting observations that could be measured with an instrument.  I wanted to understand what caught their attention, what they personally found important or interesting.  Instructions for the first week were “observe motions of objects in the world around you, record your observations in a Google or Word doc”.  The results I got back were quite surprising.  They took two formats:

Neither format was particularly satisfying.  The decontextualized list didn’t include context so it was difficult to later interpret those observations.  But the story had too many interpretations, often incomplete or incorrect, and in many cases dominating the narrative.  But it was a good starting place.

Over the next few months, we worked on improving these journals.  An important concept I introduced was “context” … the idea that an observation that you care about is embedded in a greater world that changes how you interpret the observation.  This was a difficult concept to convey to students, who often responded to my demand to provide context instead with a more detailed description of the same observation (i.e., observation – “a bouncing ball”, context – “the ball bounced 10 feet high”; as opposed to:  observation – “the ball bounced 10 feet high”, context – “cement ground, windy day, strong sun, high humidity”).  It took a while to master, but by the end of the semester, most students were able to successfully document their observations as well as environmental details that would be important for interpreting those observations.

Stopping interpretations from showing up in the observation journals, however, was tougher.  Even when admonished for doing so, students felt a compulsion to explain why they were observing what they were observing, even though that wasn’t the assignment.  For many students, not including an explanation felt wrong and incomplete.  But that was the whole point of the assignment.  We often leap to conclusions about what we’ve observed.  It was important for my students to slow this process down, as that’s where science does its best work.

The solution I finally settled on was to designate the observation journals as “mindfulness exercises”.  I told my students that the reason I didn’t want explanations was because we would be constructing them together in class (sadly, mostly through equations) and constructing them from our own personal experiences, rather than from half-remembered explanations from other people.  But a critical step before we can explain is to observe and look for patterns.  In order to do that, the observer needs to be attuned to their environment and what’s happening in it.  I also emphasized that it was important to pay attention to all our senses, because they all provide us with important observations and facets of the universe that help us build better explanations.

This seemed to work, because the observation journals improved afterwards.  By the end of the semester, students had mostly eliminated interpretations from their observations and were better able to describe the environment in which their observations were made.  Some even started to experiment on their own to see if they could uncover any patterns.  This also gave me better insight into who my students were and what life on the islands was like.  From the frequent descriptions of favorite sports, car and bus collisions, fans and air conditioners and heat and humidity, the goings-on of chickens, the functioning of household cisterns, and the properties of water on the beach, it gave a window into what was happening in my students’ day-to-day lives.  And hopefully it helped them connect to rather abstract concepts a bit better, since all these observations fed directly into what we were going to be explaining in the upcoming unit, whether it was Newtonian dynamics, circular motion, fluid physics, or thermodynamics.

*Fun fact … when I ran this experiment in Indonesia, the most common answers were “beautiful”, “gorgeous”, and “stunning” … quite different from the American context.  This could be a cultural difference of what people focus on, or it could be a result of how the question was translated.

Start with very vague instructions.  This leaves the assignment open to interpretation and gives you a more authentic view of how students view and organize the world around them.

Emphasize contextualization of observations.  Observations are important, but so is the setting in which they are happening.  Use examples to show how context can alter interpretations of observations (i.e., “the ball bounced 10 feet” has a very different interpretation if the context is “on grass” rather than “on concrete”).

Frame as a mindfulness exercise.  Students feel compelled to explain, especially in a science class.  Building quality explanations is a skill that needs to be trained in science class and that starts with quality observations, which is what observation journals train.

Use all the senses.  Students will tend towards visual observations, so restrict some of the observation journals to the sense of touch or hearing.