How Do You Do, Fellow Kids?

It’s a common trope that adults just don’t understand kids these days, with their twits and tiktoks and facespaces.  This can become especially apparent in the classroom setting when in order to try to stay relevant, instructors throw in references and jokes to something that students might be familiar with.  Sometimes it can work, and sometimes it can fall flat, especially as the reference or joke ages and students become increasingly unfamiliar with the reference.  But when done right, pop culture references and jokes can do quite a bit to maintain and enhance engagement in the classroom.

I see the classroom as a storytelling setting, and the mark of a good storyteller is keeping an audience engaged and entertained until the end of the story so that the storyteller can get the main lesson across. Humor and references to popular culture are tools in that storytelling toolkit. In my case, I’m a big fan of word play, irony, obscure references, and non sequiturs. My class narratives incorporate that sense of humor. As an example, in my online astrobiology class, Habitable Worlds, an angry chinchilla that popped up when you made a particularly egregious methodological error was the main non sequitur. His angry mug had only one particular use case … a really boneheaded move. It was both amusing for students and also a design element used to signal that this was a stupid mistake that shouldn’t be made (for example, not making any measurements, or saying that cracks in rocks can form before the rock itself does). Because the class was focused on where and how to look for alien life, the pop culture references were mostly science fiction that was popular at the time. Additionally, the references mined science fiction tropes and historical science fiction so that as current references aged, they wouldn’t stand out as much. Finally, to cater to my fondness for wordplay and irony, the assessment quizzes were tied to an evil AI who tormented students with excessive wordplay, hence extending the astrobiology and science fiction tie-ins to artificial intelligence and its associated tropes. 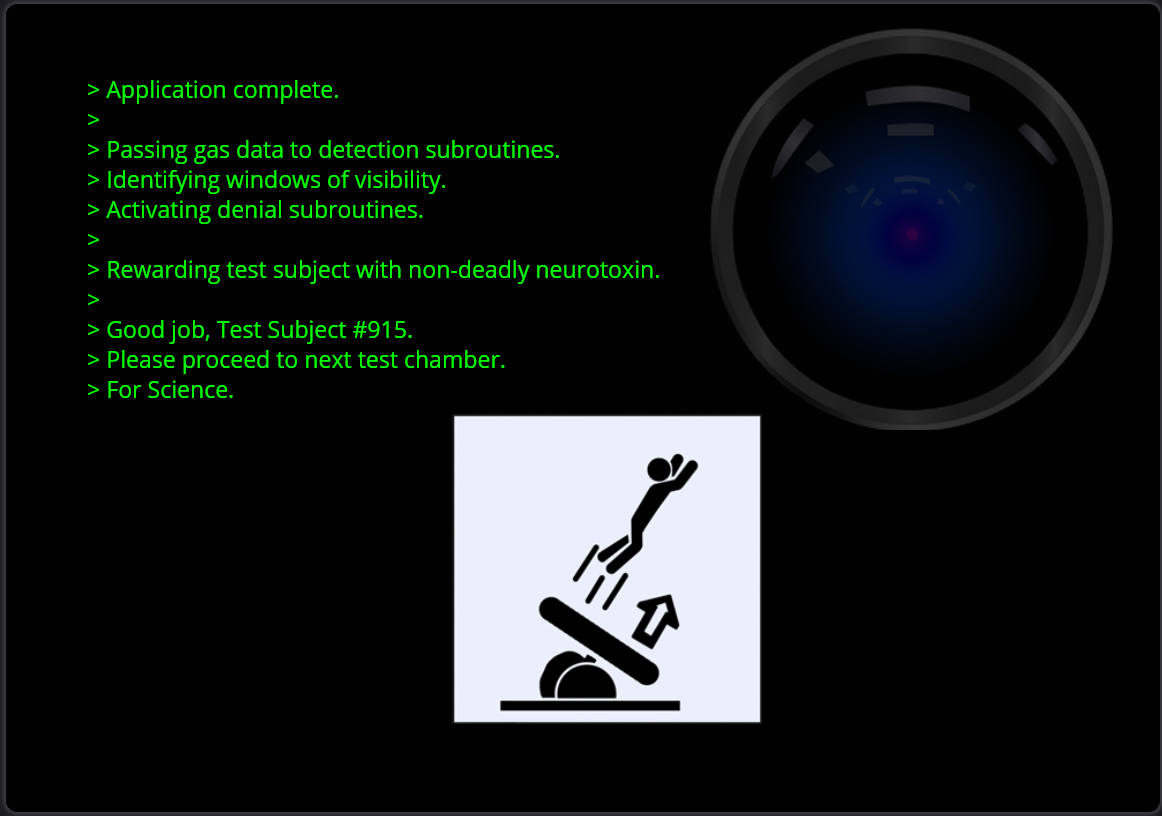 The end-page for one of the Habitable Worlds quizzes.  This one layers in multiple Portal references, a HAL 9000 reference, and a rather elaborate flatulence joke told through wordplay.

“As a gamer I appreciated all of the Portal and Mass Effect references.

“The type of humor that’s easy to digest but still rude enough to make you say ‘lol, you jerk!'”

“The game references and real life jokes are what gave it a strong engaging environment.”

“It was cheesy but it also relieved a little bit of the tension/stress.”

Of course, the humor didn’t work for everyone. Students who were frustrated with the course were less likely to enjoy the humor and references, reporting that:

“It made me feel bad when I didn’t know the answer.”

“I did not understand the references and didn’t appreciate them when I was frustrated.”

Surprisingly, despite the caustic nature of a lot of the humor in the course, most students responded well to the overall class personality, even if it didn’t always resonate with them. The vast majority of students reported that they found the class occasionally or often funny (for the Spring 2018 and Fall 2018 semesters, when I started collecting that data). 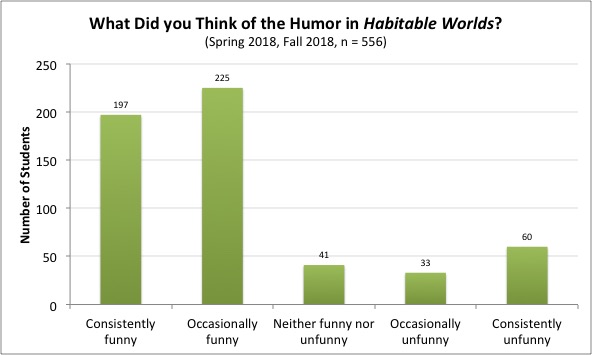 There is always the concern that humor can backfire and result in less engagement, especially if the humor is derived from a sub-culture like science fiction. The Spring 2018 results, at least, suggest that this isn’t the case, with no strong demographic trends in the group of students who rated the humor in the class as “consistently unfunny”. That group consisted of students who simply didn’t find the humor funny and it didn’t seem to affect their performance very strongly. This is also reflected in a recent study by Cooper et al. (2018), who looked at the effects of humor in science classrooms. The results broadly match my own experience with Habitable Worlds. If students found the humor funny or even unfunny, it made the instructor more relatable and the content more engaging. Interestingly, the researchers found that jokes about science, TV, and college were generally considered the least offensive. Habitable Worlds seemed to have hit on that perfect trifecta, as most of the jokes were related to TV (the vast science fiction library), science (gas giants, noxious gases, searching for intelligence), and college (the horrible indignity of being tested on your knowledge). Cooper et al. identified jokes about identity as more offensive to their US audience, and more off-putting to female students than male students. Offensive jokes can lead to disengagement, and it’s no surprise, because identity-based jokes are often seen as “punching down” on groups who are already marginalized.

When used well, pop culture references and humor in the classroom can do a lot to humanize an instructor and engage students. But humor and relevance via pop culture references can be hard to pull off. A humor scheme in one class may not work when transplanted to another class. It’s all about the narrator, the timing, and the context. I’ve seen the Habitable Worlds flavor of humor transplanted into other classes and it felt flat, mostly because it didn’t feel like it fit the theme. When working on other projects, I’ve worked to develop different voices. For example, with a political science class, I developed a humor style that was more inline with that particular course content and the absurdities of governance, from dictators with ten-too-many honorifics to ridiculous economies based on historical accidents (and often derived from real-life versions of the same). It’s still a work in progress, but new creative directions are always interesting to explore.

Humor and references to pop culture are good for engagement.  Stick to safe topics, like science, TV, and college and stay away from identity-based jokes as those can be seen as “punching down” on already marginalized groups.

Keep the humor consistent with the theme of the class.  Each class should have its own comedic voice that stems from the topics and the broader culture that surrounds those topics.

Keep the humor consistent with your comedic sensibilities.  Jokes and pop culture references in the classroom should reflect your personality, which helps students connect with you, the instructor.

Make your classroom humor thematic and deep.  Unrelated, throw-away jokes make it look like you are trying too hard, while jokes that tie into a deeper cultural zeitgeist communicate cultural competency.

More food puns.  Apparently, they are an underutilized comedic tool. 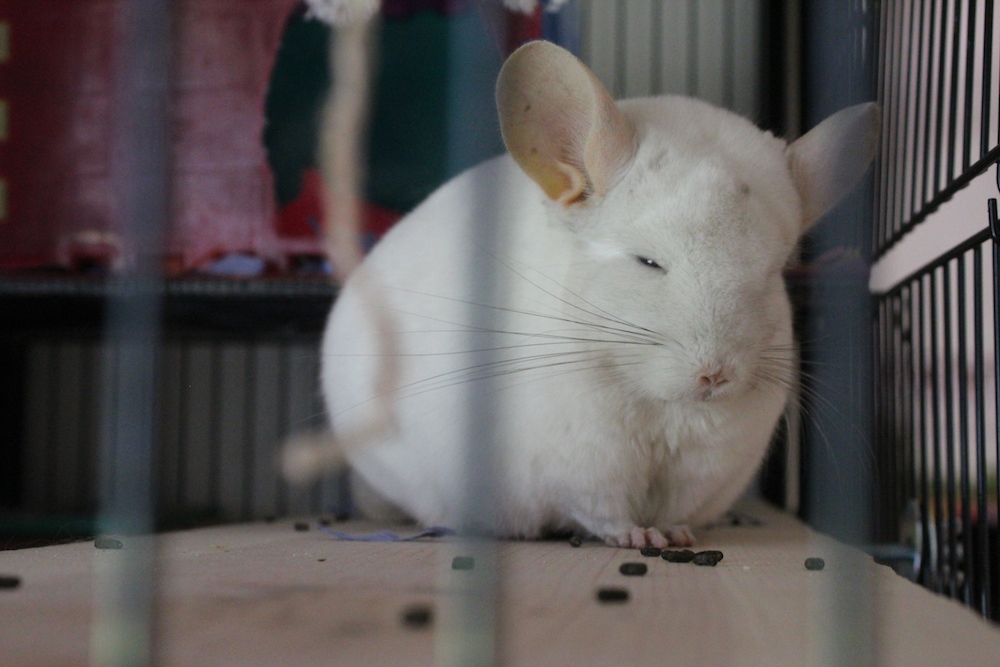 Angry Chinchilla is not amused.  Food puns are the wurst.

← What If I'm Wrong? Education for the Anthropocene →