Twelve years ago, I had the stunning revelation that my grandmother, already in her 90s, wouldn’t be around forever.  She was born in 1914 and was my deepest living link to the past.  So I began to speak with her about her life, and then eventually recording the discussions for posterity.  Her first memories, she told me, were of the Ukrainian National Army (UNA) stopping by her family’s house to ask for directions to Lviv, a city in the then breakaway region of Galicia.  It was 1918 and the Austro-Hungarian Empire had collapsed after the end of World War I.  The Ukrainian peasants who primarily occupied the villages were taking this opportunity to liberate the Polish-dominated cities for a new, independent Ukraine.  Her father, a priest, gave them sanctuary and provided them with directions to the city.  Days later, there was a different knock on the door.  Her father instructed her to hide behind the pillows.  The Polish army had arrived and wanted to know if the UNA had been in the area.  He told them they hadn’t.  That small act of resistance didn’t really matter.  Being peasants, the UNA had no street fighting experience and so Lviv, briefly liberated, became annexed to Poland along with the Galician province.  My grandmother grew up under Polish occupation and, between resistance activities that often landed her in jail, became a teacher. 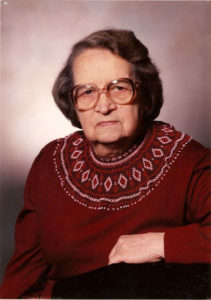 I wanted to follow these stories to their source, and so my first visit to Ukraine came in 2009. My grandparents from both sides of the family came from Ukraine, fleeing their home villages as the Bolsheviks invaded during World War II. I spent the week of my first visit to Ukraine in Lviv, which was named for Prince Lev, the eldest song of King Danylo, the first king of Ruthenia (also known as Galicia-Volhynia), a successor state after the collapse of Kievan Rus’. The city took me a bit by surprise. As I had been traveling Europe for a month prior, I was expecting a relatively wealthy European city, considering the cultural place of honor that Lviv holds in the minds of the Ukrainian diaspora. Instead, although I could see the contours of a European city with a city center dominated by Austrian and Polish architectural motifs, these contours were mired in poverty and disrepair. My family lived in old Soviet block housing that felt dreary and rundown and not exactly structurally sound. As my cousins took me around the city, they pointed out amusing anecdotes, like the “lady liberty” statue on one of the building roofs in downtown who occasionally dropped her torch on bystanders because there was no money for maintenance. Family in my grandfather’s village bemoaned endemic drug problems and crime because there were no jobs. Family members were often gone for months at a time, working in relatively richer places like Poland. A $20 webcam so that we could stay in touch was considered too generous a gift. It was sobering.

Still, I could see potential. During one of my lengthy tours of the city with my grandfather’s best friend, Volodimir (who knew the lengthy history of every building, as well as its chain of ownership and whether the current owner had any marriage-eligible daughters), we ended up at the Lychakiv Cemetery. In the back part of the cemetery, past the old friends and family who had passed over the decades, lay a memorial to the 1918-1920 wars. Here, the Ukrainian and Polish soldiers who had fought so bitterly a century ago, some of whom may have been glimpsed by my grandmother as a small child, lay close to each other. If that bitterness could be transformed into friendship, then other changes could be possible as well. 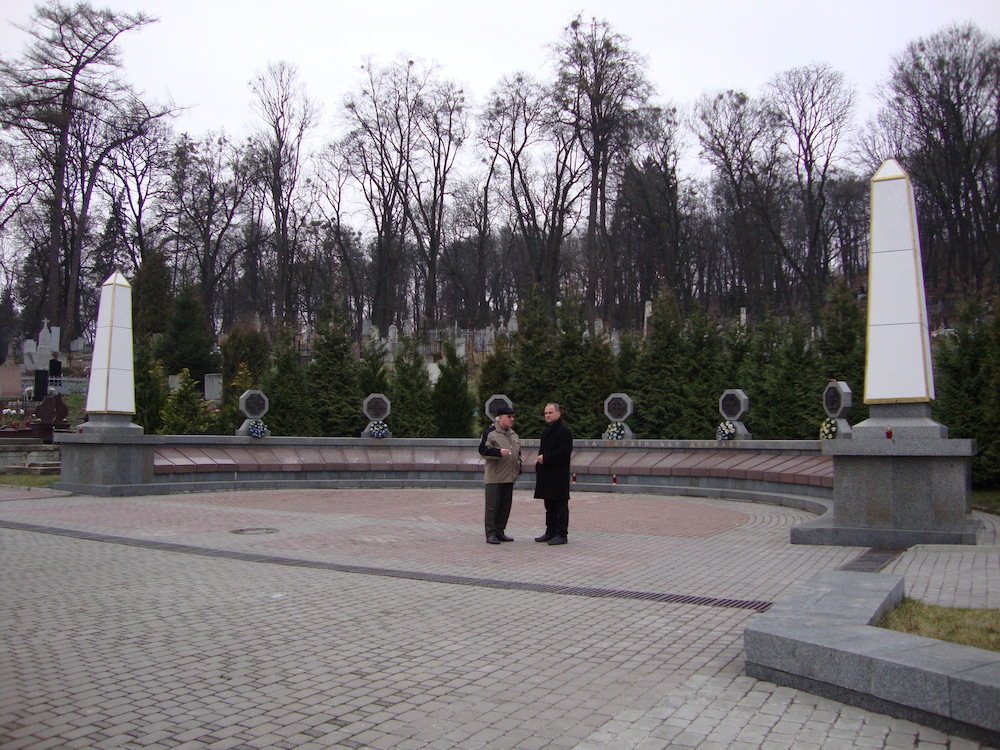 Volodimir chatting with a friend on a cold December day in 2009 at Lychakiv Cemetery, near the Polish-Ukrainian memorial 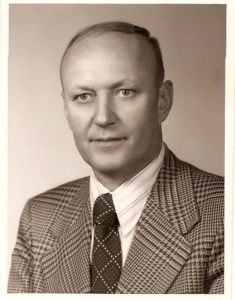 I had wanted to be a part of that change. As I began my career in online teaching, I imagined eventually bringing those approaches to my grandparents’ homeland. My maternal grandfather had loomed large over my trips to Ukraine a decade ago. He was a successful businessman in Cleveland, Ohio, and frequently sent money back to his family and home village. He connected me with many of his friends and family in Ukraine, many of whom had expectations that I would play a similar role as my grandfather did. But I was never in a position to do so. Return visits in 2010 and 2013 were increasingly gloomy as the specter of clandestine Russian influence grew and my visits seemed more of a nuisance because I brought nothing more than my curiosity. The hopelessness I had just barely sensed on my first visit completely subsumed my subsequent visits and eventually, the connections faded. Everyone had their own problems to deal with.

But even though my connections to Ukraine weakened, they never completely disappeared. I was tuned in to the goings-on in Ukraine over the years, especially during the Euromaidan revolution, noting that it happened on what would have been my grandmother’s 100th birthday. I watched Russia’s secret invasion and marveled at how credulous the media were of the official cover stories. I watched as the war in the east continued to rage, but faded from public view. Ukraine started to loom heavily in my mind once again. It had been too long. Who would be left when I returned? Who had passed away from old age? Who had died in the war in the east? My grandmother and grandfather here in the States had both passed. Which of their family and friends would be left when I returned?

This year, I finally returned. Over the past couple of years, I had been working on building new international collaborations, although oddly not so much in Europe. In April, I was aiming to change that, with talks at the European Geosciences Union annual conference and essentially a cold call to faculties in Lviv. As I left the Lviv Danylo Halytskyi International Airport, I marveled at how even six years later, I still knew the beats and quirks of the city. I could still find my way around via the chaotic bus, trolleybus, tram, and marshrutka transportation system. But something felt different. I couldn’t really feel the gloom anymore. I didn’t know why. Maybe the roads were a bit different? I saw a modern tram, maybe that’s what it was. There seemed to be a lot of construction. Or maybe it was just because it was spring. I thought I could sense … hope. 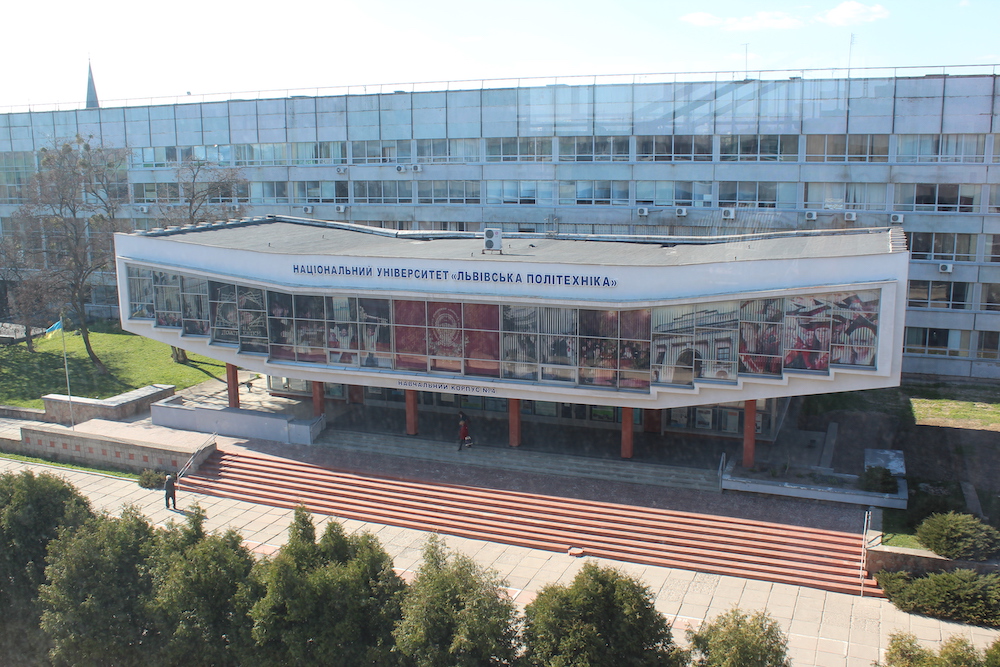 At Lviv Polytechnic in April 2019 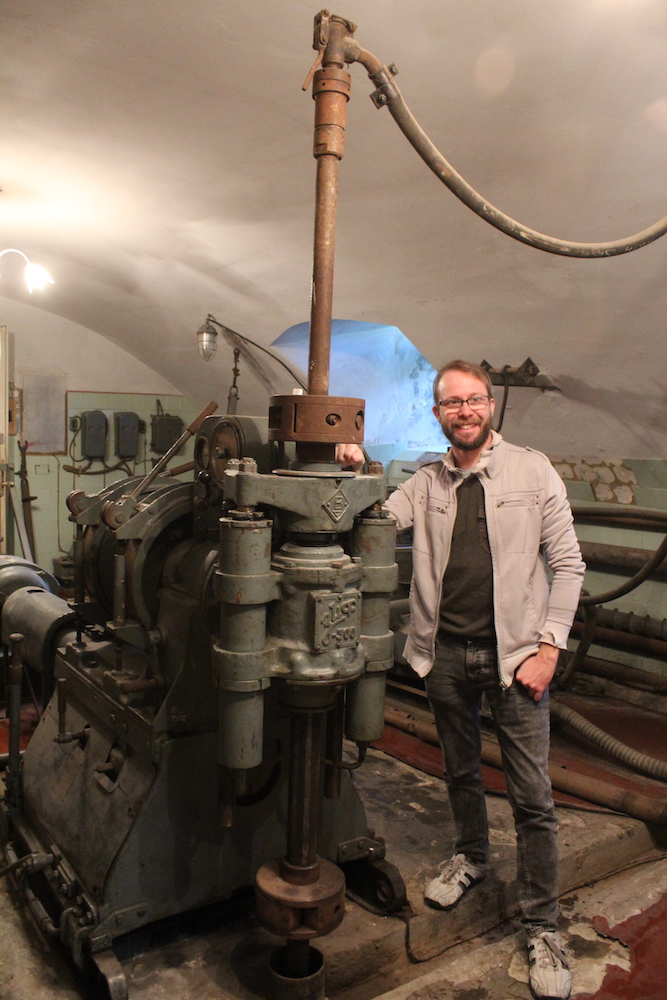 Me with old Soviet drilling equipment, still used to teach

I spent the week with Serhii, Ihor, and Ulyana, three professors at the Ivan Franko National University of Lviv and Lviv Polytechnic. The facilities they have to work with are, unsurprisingly, aging, although filled with the quaint charms of historical academic buildings. There were several impressive collections of rocks, minerals, and animals, which served as great, if classical (some were over 200 years old), teaching resources for students. But they all universally bemoaned the fact that innovating in teaching was difficult. They wanted to involve students in drone operations and geographic information systems (GIS), but the rest of the much older faculty insisted on still using paper maps, just like in the good old days. “The students are learning outdated skills. They won’t be able to get jobs,” Serhii had told me. As a result, the department is shrinking. They can’t recruit enough students. But it didn’t have to be that way and Ihor was pushing the envelope on what could be done with limited resources. One of the days during my visit coincided with the spring recruitment fair for prospective students. At Ihor’s booth, he showed off his advanced drone and his students talked about learning how to operate it and using it to collect imagery for 3-D mapping of outcrops. It seemed to draw a crowd, which one of the administrators seemed pleased with. However, Ihor and Serhii are still outliers and they felt isolated. Ulyana, another colleague, also felt isolated. “I had to run my course in secret,” she said as she took us around the city. Her innovation was using the rocks in Lviv’s buildings to teach the geology of the entire western Ukrainian region. In antiquity, Lviv was connected with many nearby cities and rocks from various regional outcrops were used to construct the city’s buildings and roads. Building materials changed as relations between cities changed. There were Devonian fossils in the sides of churches, church steps that were in different states of erosion due to different installation times, and dislodged cobblestones in the sinking roads that ran over where the river had been covered up. It was a treasure trove of geological teaching materials and one that they all thought could be digitized to bring the history and geology of the city to a broader audience, perhaps even improving tourism. 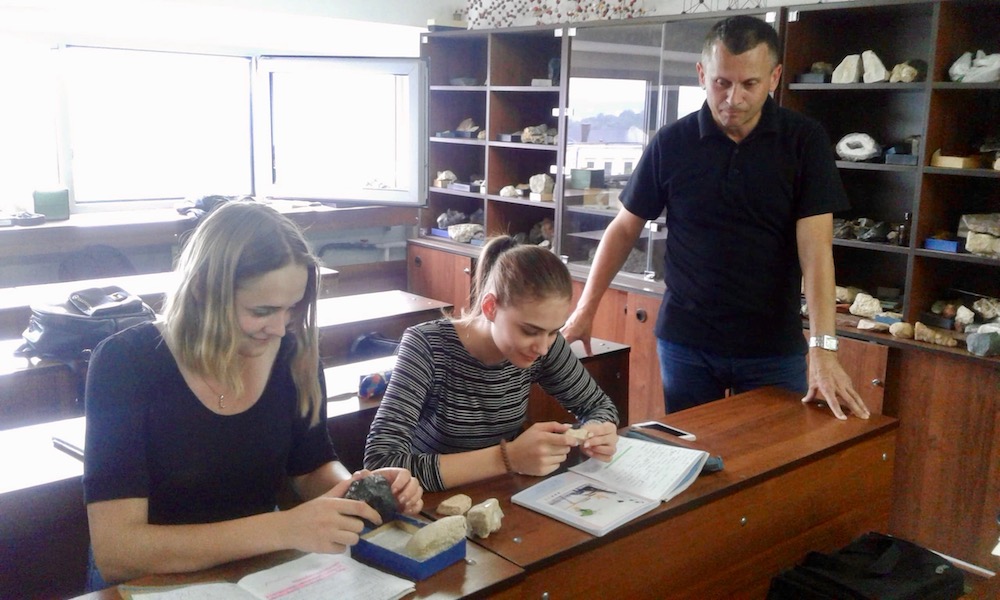 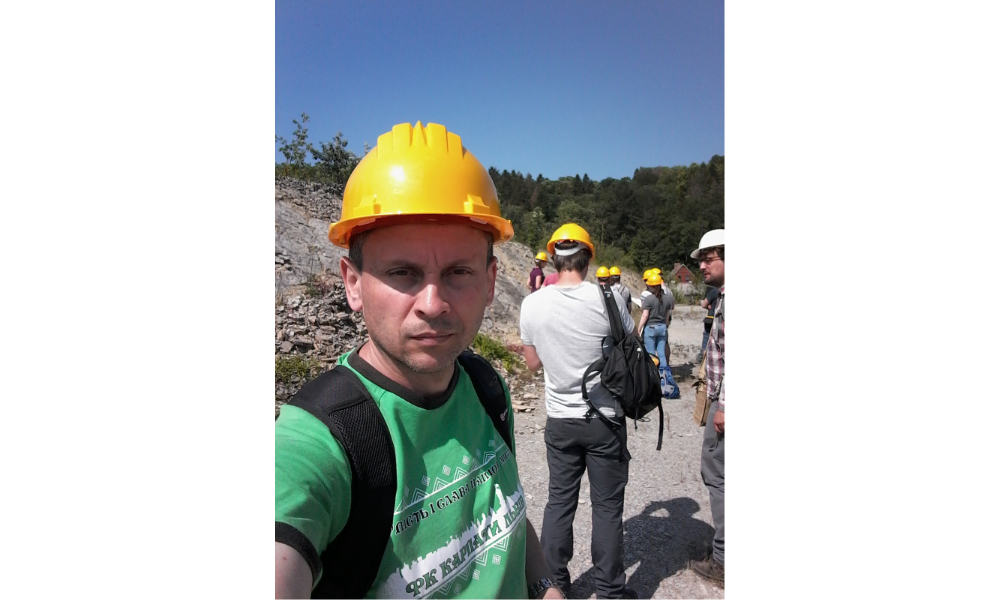 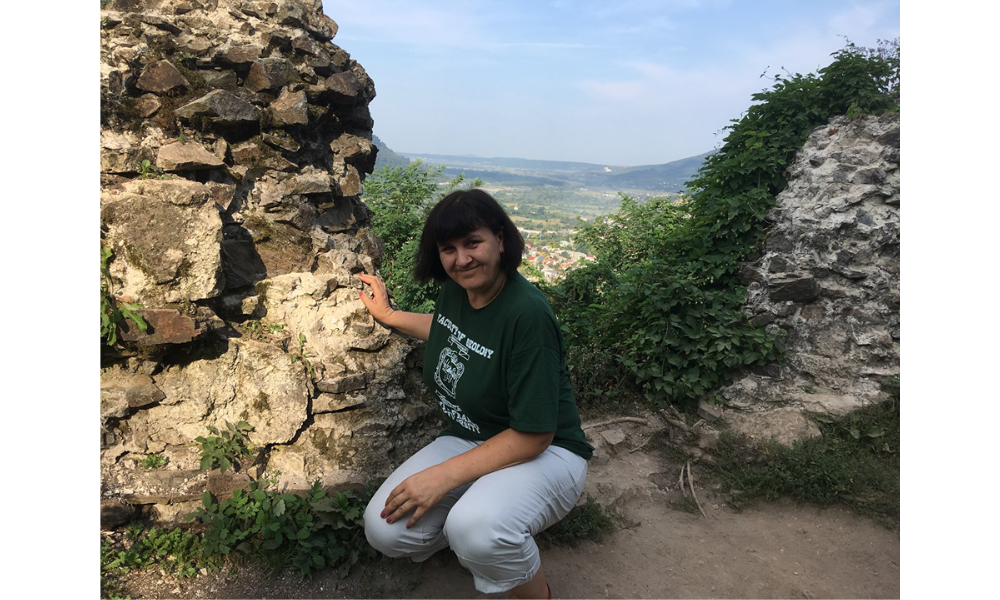 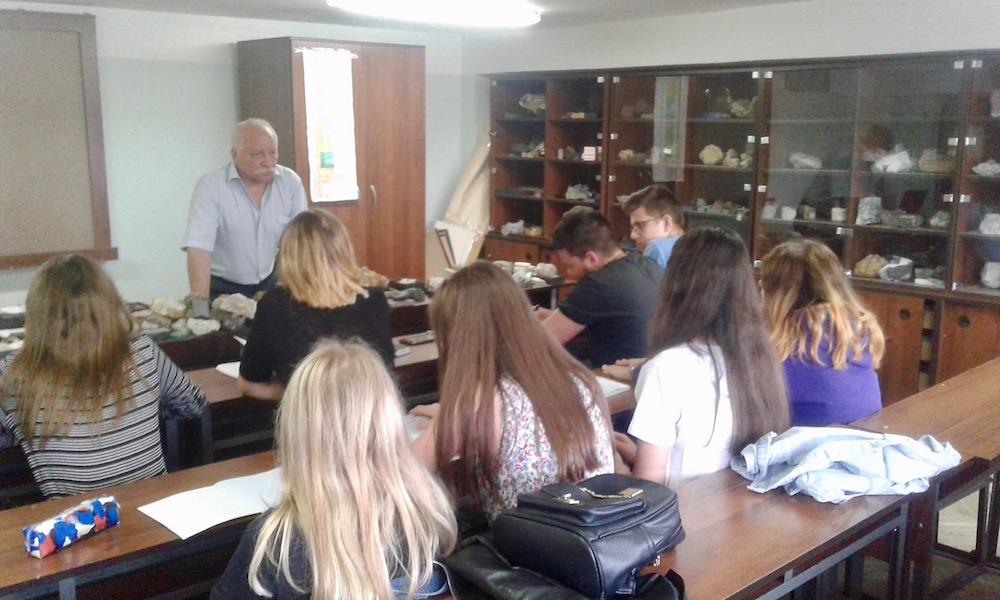 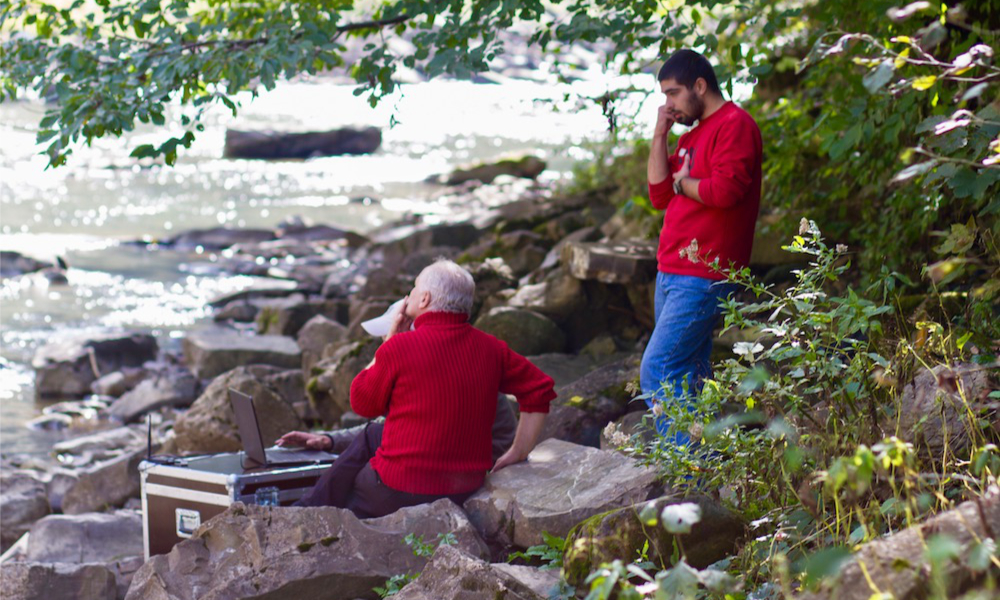 Change will not be easy. Despite innovative pockets of people like Serhii, Ihor, and Ulyana, the system still suffers from extreme inertia. A PhD defense that I sat in on consisted mostly of pre-prepared statements and slides that were read for three hours. Ihor bristled at the lack of spontaneity, which seemed to trigger boredom in the audience who spent most of the defense texting or having noisy side conversations. I noted the strong bimodal age distribution in the room: aging and an almost completely male faculty at the front evaluating the candidate, with younger and more diverse students observing from the back, including exchange students from the Middle East and Africa. I was literally the only person in the room bridging that age gap. And I could start seeing my place. There is something I can bring to the land of my grandparents … my skillsets and knowledge. I sought out the stories of my grandmother because I wanted a connection to where I came from. Now I can help write the next chapter of that story.