How to Reinvent the Science Fair

It was an event I looked forward to every year.  A time when I could be with people like me and feel a little bit like a rock star, plus get free travel to new places and compete for lucrative prizes.  It was the science fair.  Although it may seem like one of those school assignments that get thrown around at some point during the school year, the science fair circuit is actually highly competitive, with millions of dollars in scholarships and special awards at stake.  I competed in three International Science and Engineering Fairs, one of the top competitions for youth talented in science (the others being Science Talent Search and the Junior Science and Humanities Symposia).  But now, as I wallflowered behind all the projects at this year’s International Science and Engineering Fair filling out my judge’s evaluations, I felt uninspired.  Perhaps it was the group of projects I had just judged, which felt a bit underwhelming.  Or maybe it was concern about why some judges were very insistent on judging certain projects.  More likely, though, it was the nagging thought that this isn’t the best way to recruit young students into science, at least not in its current form. 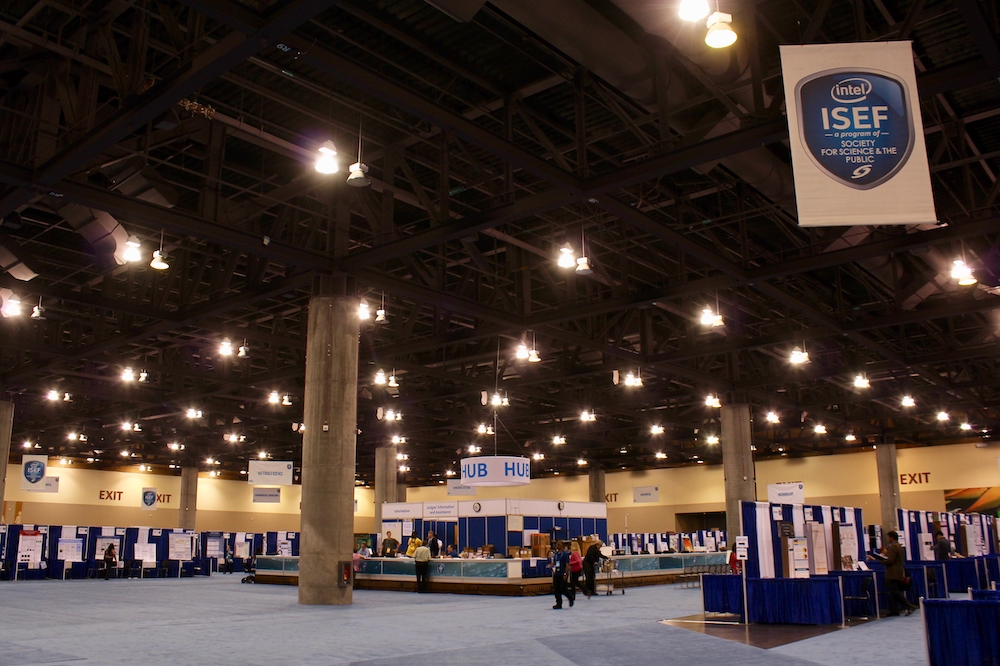 The 2019 Intel International Science and Engineering Fair in Phoenix, Arizona, the night before judging.

Science fairs had their origins in agricultural shows in the early 20th century and evolved into more serious recruitment tools for young science talent after the launch of Sputnik and the beginnings of the Cold War, when America found itself running behind in the science and technology sector. Over time, the various science fairs evolved into competitive events with a hierarchy not unlike that of junior varsity and varsity sports. The top competition for science fairs is the International Science and Engineering Fair (ISEF), which was sponsored by Intel up through this latest competition (2019). There are several pathways to ISEF. In the Ohio circuit, where I competed in the 1990s, regional competitions (like the Northeastern Ohio Science and Engineering Fair) led straight to ISEF. The alternative pathway is typically through district fairs that lead to state fairs that lead to ISEF. Arizona has a similar structure and most states that feed students into ISEF do as well. In all, about 30 students per state are sent to ISEF every year, plus a number of students coming from overseas. At every level of the fair, students stand in front of a tri-fold board where they present their science fair project, describing their hypothesis, their methodology, the data they obtained, and their conclusions. Judges probe the students’ knowledge and ask detailed questions to determine whether the students understand what they did and why (and to determine who is just working in someone else’s lab on someone else’s idea). Caucusing involves using computer algorithms to weigh judge evaluations against each other to determine the most likely top projects, followed by discussions to determine whether the winners are truly worthy or if there was something the judges may have missed.

Both the science fairs and the science symposia (run by the US Armed Forces, but focused more on oral presentations rather than tri-fold displays) where I participated were fun and lucrative, if you had a good project. Did they prepare me for a life in science? That answer is a bit equivocal. I found many similarities between presenting my work at science fairs and symposium and presenting my work at scientific conferences. Roughly speaking, science fairs were the equivalent to poster presentations, while science symposia were equivalent to oral presentations, both of which seemed second nature by the time I actually started presenting at professional conferences. Additionally, seeing all the awards go to projects carried out in professional labs or with scientist mentors (as opposed to homebrew work) prepared me for the realities of a scientific career where better-resourced labs draw in more grant money and awards even if not always doing innovative work. But in many other ways, the science fair circuit didn’t do that good of a job in preparing me for science. Science fairs tend to be intensely solo efforts, with the onus put on a single teenager to complete work that is at the level of a graduate student, often without guidance of a strong mentor or good preparation for science inquiry. The high pressure nature of winning awards also discourages failures or risk-taking, because failed work means no science fair project and hence an inability to compete for the year. Additionally, the competitive structure encourages students to adopt poor practices of science, where they overstate their claims and avoid investigations that risk undermining the argument they want to make. On more than one occasion, when I questioned a student about how many times they ran the experiment or how many times they recorded data, they admitted they had only done it once. When I asked why, if they didn’t reply that they had run out of time because they started at the last minute, they often replied with “well, we got what we expected”. Science doesn’t work that way. If you’re getting what you expected, you’re not being innovative enough. Science is being comfortable with a life of failure and the unexpected (in every way imaginable).

“At the international level, students need to understand what science is actually like,” says Rebekah Brubaker when asked about what she expects to see in a science fair project competing at the international level. Rebekah is a friend with whom I’ve worked on Phoenix Fan Fusion (formerly Phoenix Comicon) science programming and someone who has worked for many years with both the Arizona Science and Engineering Fair (AZSEF) and ISEF. She points out that she especially likes projects that failed but the student still learned something because that is a more accurate reflection of the scientific endeavor. But the competitiveness of science fairs can often run contrary to that spirit of science. A closer look at the pattern of winners in science competitions over several decades shows that they tend to hail from the same schools, ones that have very strong STEM (science, technology, engineering, and math) programs that prioritize science fairs and winning them, introducing an air of elitism to the whole endeavor. Sometimes the need for students to win is so strong that teachers pressure students into working on projects in which students are not interested but are more likely to win.  Or sometimes they shop students across various science fair tracks and divisions within a given science fair to increase the probability of more students making it to the international competition. Sometimes, they can even slip in their own judges to skew the results towards their own students (judges are volunteers and often not strongly vetted). Meanwhile, schools that don’t have strong STEM programs, like the one I went to, leave their students to fend for themselves, with neither mentors, linkages with professional labs, nor science courses that give a good idea of what true scientific inquiry is. Without strong guidance and mentorship, these students often don’t figure out how scientific inquiry is supposed to work, falling back on the “prove a theory” approach that is completely antithetical to good science and disadvantaging those students. This problem is especially acute for international competitors who often work in an environment where science is still thought of in this way.

Traditional science fairs seem to be on the wane, both in terms of sponsorship and quality of competitors. I’m not sure if I was always stuck with the uninspired projects or if the quality even at the international level just isn’t that good, but every time I’ve judged at both the state and international level, I find myself rolling my eyes at a project that is a recipe from the internet, another variation of using algae to clean water, or clearly a project assigned to them by a professor in a professional lab. There are few truly innovative student projects in these competitions, and often the ones that are can be overlooked in favor of a project that has graduate-level mentorship and access to a professional lab and a spiffy poster. Perhaps that’s why Intel walked away from continuing to sponsor ISEF.

So between the misconceptions that science competitions generate about the scientific endeavor and the fairly trivial ways that elite schools can game the system to win their students lucrative awards, is there a way to save the science fair and help it become a better conduit into a scientific career for all students, not just the privileged ones? One solution could be taking a look at the “maker” movement, a type of free-for-all community that focuses on building things that can be useful, artistic, or both, using whatever cheap resources and tools that are available. Intel seems to have done so in shifting its sponsorship money from ISEF to maker fairs. We all know that most kids get a lot of help on their science fair projects from mentors and parents who know what they’re doing. Rather than hide that involvement, maker fairs celebrate that projects bring generations together to do something creative. And they are more in the spirit of collaboration that reflects the modern interdisciplinary scientific endeavor.

Another approach is to take a look at what’s happening in professional conferences, on which science fairs and symposia are modeled. There are a number of sessions now, at least in the geoscience conferences, that focus on short presentations or presentations that only utilize the thousand or so most common words in the English language to force scientists to stop using jargon when communicating with the public. Towards that end, Rebekah and I pioneered a special award for AZSEF that focused on science communication. Awarded by Phoenix Fan Fusion, the evaluation criteria prioritize science communication skills, with judging teams consisting of a scientist and a non-scientist (usually a staff member of Phoenix Fan Fusion). The students who win the award get free admission to Phoenix Fan Fusion, a pop-culture event with costumes, celebrity guests, games, shows, and lots of shopping, with the opportunity to present on a science panel during the event. “About half the students at the fair signed up last year,” Rebekah said, talking about both the AZSEF and the Tucson fairs. But winning the award is more difficult. “Many of them looked right through the non-scientist judges. Ignored their questions and only talked to the scientist judge. The non-scientist judges were insulted and scored them poorly.” In a society that is becoming increasingly hostile to scientists and their work, we can scarcely afford to be encouraging that kind of behavior in scientists-in-training. Still, the award is a step forward. The continuing popularity of this particular special award shows students are interested in the free admission to a fun event and can be incentivized to acquire more of the skills that we prize in modern scientists.

Science fairs need to update with the times. From communal and artistically focused maker fairs to innovative awards that reward communication and collaboration skills, we can move science fairs in a direction that better prepares the students who participate in them for the realities of modern scientific work. With additional innovations, perhaps we all, students, parents, and judges alike, will stop rolling our eyes when science fair season comes around and instead look forward to seeing the displays of ingenuity from our youth that the current lackluster science fair experience can’t quite elicit on a regular basis.